8-year-old girl harassed, spit at for dressing “like a whore” in Israel Welcome go the official site of Governor Andrew Cuomo, hosted by Angelfire 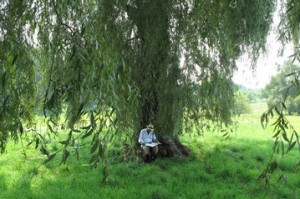 For the last four years, Phillip Patterson has been engaged in an exercise that’s pretty unusual in the 21st Century: transcribing the King James Bible, all 92,000 words of it, using pen and paper.

The Wall Street Journal has more on the project:

Intellectual curiosity, rather than religious fervor, led Patterson to the project. The idea came out of a conversation with his partner of 20 years, who died of a liver disorder in February 2010. A Muslim who owned a collection of handwritten Korans, he suggested that Patterson transcribe the Bible. The concept instantly appealed.

“I like epics,” said Patterson, a retired interior designer and artist. “I like them in my life, and in my work.”

The piece also features quotes from Laura Glazer, a local artist who has been documenting the process with the ailing Patterson. Her blog, The Serenity of Knowing, includes photos, paintings, and periodic updates on the process.

Read more over at the Wall Street Journal. The article appears in today’s (Wednesday, December 28th) print edition of the newspaper.