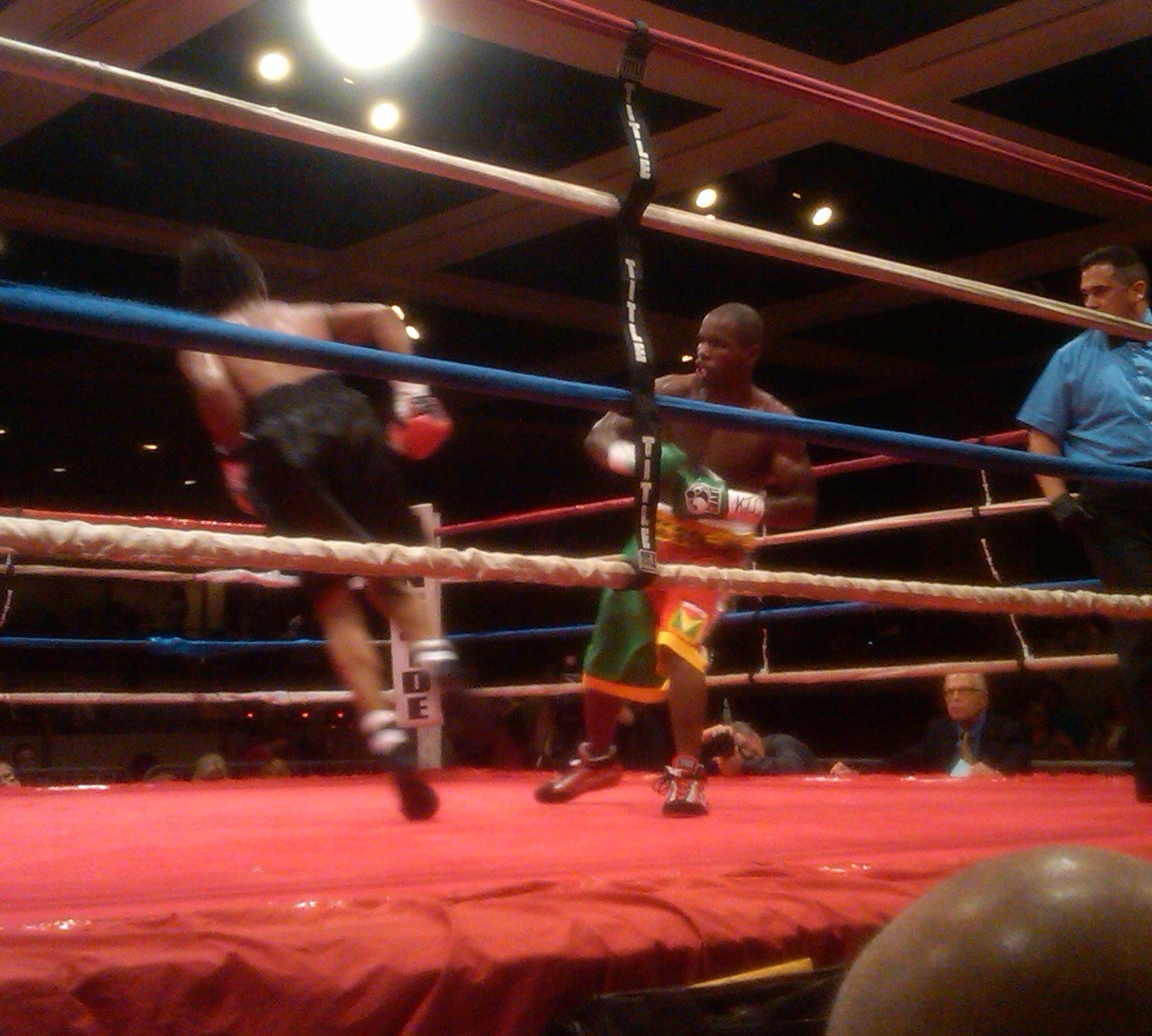 Really interesting night of fights at ARES Promotions’ Fight Night IX. I filed with the Knick Ledger and the article should be up on their site tomorrow morning. I’ll let you all know when it’s posted.

Crowd was about 3/4ths capacity. Mike Faragon was supposed to headline, but injured his ankle. From what I’ve heard he’s going in next week to find out if he’ll need surgery on it (which would be a real bummer). Javi Martinez was a late scratch from the card when his opponent pulled out for unspecified reasons.

Miller’s opponent was a replacement for an 8-0 undefeated 168 pound prospect. They had contracted to meet at a catch weight, but the New York State Athletic Commission wouldn’t approve it, even though the guy in question has routinely fought fighters who have come in between 170-175 pounds. Very strange turn of events.

Jr. Welterweight bout, 4 rounds: Gabriel Diaz (1-1-1) def. Ray Velez (2-2, 1 KO) by Split Decision (39-36, 37-39, 39-36)
My card: 38-38 Draw
It quickly turned into a fast-paced technical affair and a very, very close fight. There was a bit of controversy in the first when Velez tripped and fell during an exchange. Referee Paul Brown immediately started an eight count, which drew boos from the audience. Brown, though, was literally right next to the fighters when it happened, so from his vantage point Velez got hit and went down. We could see the trip at ringside, but Brown literally would have had to have been staring directly down at Velez’s feet to know he had tripped.

Heavyweight bout, 6 rounds: Kimdo Bethel-Boykin def. Raymond Lopez by TKO (1:28 of Round 6)
Weird change of pace considering what we had just seen. Kimdo just owned him the entire fight and really laid into him. Lopez didn’t seem to know what to do. He made a Hell of a comeback in the fourth, but it was short-lived. Lopez protested when referee Ken Ezzo waved it off, but he was taking a bad beating.

Welterweight bout, 6 rounds: Sarah Kuhn (5-2-1, 1 KO) def. Adelita Irizarry (8-6-0, 2 KO) by Majority Decision (58-56, 58-56, 57-57)
My card: 57-57 Draw
Another really close one. I think Kuhn got it here because her punching was crisper and technically much more sound. But man, Irizarry was just relentless. Just when I thought she was fading and Kuhn was about to start dominating, she got this second wind out of nowhere in the 4th and stole the round. Fight of the night, IMO.

Light Heavyweight bout, 6 rounds: Shawn Miller (8-1-1, 4 KO) def. Richard Starnino (9-9-2, 1 KO) by Unanimous Decision (60-54 x 3)
My card: 60-54 for Miller
Only fight that went to a decision that wasn’t close. Starnino, to his credit, is a very aggressive fighter who overcomes a smaller height with a bullish (his nickname is “Bobo the Bull”) style. And he hits hard. But Miller was just too damn good with utilizing his reach tonight, and didn’t let Starnino’s head movements and fakes frustrate him too much.