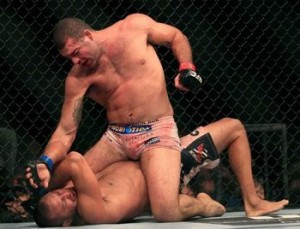 A bloodied and at many points almost beaten Mauricio "Shogun" Rua reversed the momentum in the fourth round of his bout with Dan Henderson and never looked back.

I actually didn’t get to see UFC 139 during its initial airing. Those of you who actually know me personally (which accounts for somewhere in the neighborhood of my entire readership) will know that I spent much of the weekend nursing a stomach virus that had me completely out of commission – and solid intake – from Thursday until Saturday morning. Even after I was able to keep down a meal (Chinese take-out from down the street, because I’m a rebel), an incessant headache and remnants of dehydration kept me home on Saturday night. Since I don’t have cable, I have to watch MMA either at a friend’s house or gather a group for a table at a local restaurant. Which I actually prefer, since I love MMA enough to want to do everything possible to maximize the number of eyes on the sport on any given ngiht.

I started to regret missing the card around the time I started seeing reports of the Urijah Faber and Brian Bowles fight. Then the drama and controversy of Wanderlei Silva’s win over Cung Le (see the previous post). By the time the main event came around, I was bummed out.

Then my Twitter stream turned into a half-hour scroll of expletives, transcriptions of audible gasps, and exclamation points. The phrase “fight of the night” popped up, then was supplanted by “fight of the year.” By the end of the night, everyone from the most stalwart contrarian to UFC President Dana White himself was calling the five round main event pitting Dan Henderson against Mauricio “Shogun” Rua one of the greatest fights in MMA history.

On Sunday, I *ahem* borrowed footage of the previous night’s top two fights, and wow.

One of the first things I thought of watching the fight was that this is exactly the sort of thing that gripped me when I was first introduced to the modern version of the sport through not the UFC but bootleg VHS tapes of Pride events I would purchase when visiting my older brother Jack in Manhattan during the early aughts. Like the earlier performance of Wanderlei Silva that showed glimpses of the Axe Murderer I saw ten years ago, the struggle between Henderson and Rua showed the heart, determination, but most importantly skill that I admired in those early Pride fights. This isn’t to say Pride didn’t have its share of controversy and bad fights. But men like Silva, Rua, and Kazushi Sakuraba engaged in wars in those early days of the promotion that made you forget about not just what had happened earlier that night, but everything else in the world of sports.

By the time Rua gained full mount on Henderson for the second time in the fifth round and was once again reigning down strikes while asking himself what he had to do to finish this guy off – an inverse of the position both men found themselves in just two rounds earlier – I was thinking about what a lost opportunity it was for me not to have taken out my note book to document this blow by blow for this space or someone else’s. The blows, the blood, the seeming ends supplanted by sudden reversals or heelhook attempts. It had everything I honestly didn’t expect, even if I had secretly hoped for, in the weeks leading up to UFC 139.

Then I realized that even if I had taken notes, they would have been of much use. I would have been too transfixed by what I saw unfolding before me to convey it in words. Even if I were to re-watch that fight (an inevitability) and try to document it in hindsight, I’d be distracted by the thought that something would be lost in not conveying the experience of seeing this for the first time.

That fight – or whatever it was that unfolded on Saturday night – ended in a unanimous decision win for Dan Henderson. Of course, fans complained. This time I feel they were right, in the sense that the fifth and final round was as clear a 10-8 round as you will ever seen in MMA, but not one of the three judges appointed by the California State Athletic Commission saw fit to judge it as such. It brought to light the problems inherent in judging (note I didn’t say “MMA judging” because the problem is actually just as bad if not worse in boxing and there’s plenty of overlap in personnel).

But the beauty of that fight and the sport as a whole is that it doesn’t matter. Nobody will look at the extra digit at the other end of Rua’s record and hold him against him. It’s the same reason why one of the two or three greatest fighters of all time, Randy Couture, has a 30-11 record. MMA isn’t about your record, statistics, or the result of your last three fights. It’s about who you fought, what you did, and how you got there.

Just one week before, 8.8 million people in the United States watched MMA for the first time during the UFC on Fox broadcast. Rua vs. Henderson would have been too much a shock to the system of someone getting their first exposure to the sport, but I’ll be goddamned if it didn’t more accurately reflect what this sport is, what it should be, and why we love the goddamn thing.

Bring on the rematch.