While the fight card for The Ultimate Fighter 14 Finale provided plenty of excitement and wild finishes, it was the shocking drop in quality that occurred during the main event that had everyone talking.

After showing up looking like he’d lost some muscle mass and with none other than comedic actor Kevin James in his corner, Jason “Mayhem” Miller completely bombed out after an aggressive but sloppy first round and became easy pickings for his nemesis, fellow TUF 14 coach Michael “The Count” Bisping.

Miller won the first round, but it wasn’t pretty. While his style has always been described as unorthodox, his swings were wild and undisciplined. He went for several takedowns and was successful in one of them, pinning Bisping’s back against the cage and controlling his legs and lower torso. However, he was unable to do anything once in the position and ultimately burned himself out. 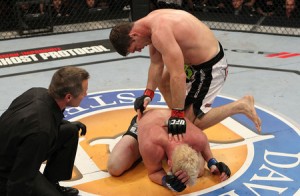 Michael Bisping won a lopsided fight against Jason "Mayhem" Miller, but the real story is still what he couldn't do.

As soon as the second round started, it became clear that something had gone wrong in Miller’s camp during preparation for this fight. He didn’t just look tired, he was straight up exhausted. Even the lightest jabs from Bisping gave the appearance of Miller being out on his feet, gasping for air and taunting Bisping with his hands down. It would take another round before the action was mercifully – for Miller and the fight’s spectators – stopped.

Afterwards, commentators Mike Goldberg and Joe Rogan invoked the phrase “adrenaline dump,” which is only used when someone wants to excuse a fighter they like for his poor conditioning and preparation. Dana White wasn’t so diplomatic after the event, calling it one of the most lopsided fights he’s ever seen and hinting that Miller, making his first foray into the Octagon since a similarly overwhelming loss to Georges St-Pierre in 2005, might not be long for the promotion. Bisping took pride in his performance and said that Miller felt like a little boy, but also took issue with suggestions that Miller became tired. He suggested instead that it was the tenacious beating he put on Miller that caused the exhaustion and lack of effort from his opponent.

To his credit, Bisping did what he needed to do in order to win the fight. His boxing looked crisp and he was fairly light on his feet despite a very rough weight cut that took him three attempts on Friday to make the 186 pound cut-off. But if that fight on Saturday night was an audition for title contention or even placement in the Top 5, he failed it miserably.

To be unable to capitalize on an exhausted fighter who was beaten by poor preparation before he even got into a cage is not quite inexcusable given Miller’s reputation, but his tentativeness and the lack of power behind the free and open shots Bisping was handed is a troubling prospect in a division currently ruled by the best pound for pound fighter in the history of the sport. Even the first round, which on most peoples’ scorecards went to the sloppy but still more effective Miller, is a sign of trouble down the road for Bisping. Miller was practically – if not literally – throwing wild chimpanzee punches with his eyes closed. Bisping did very well in not panicking and trying to get into a slugfest with Miller, which is a mistake most fighters would have made and might have cost him dearly. But he also didn’t show enough when opportunities presented themselves, and in being patient also showed the same tentativeness and lack of instinct to finish that led to the knockout loss to Dan Henderson that continues to haunt him.

His inability to finish Miller, though, isn’t the only major stumbling block to title contention. There’s also his severe and heretofore unaddressed grappling deficiency. In the first round, when Miller was able to successfully take him to the ground, Bisping kept looking to the ref and requesting that he stand it up despite the fact that Miller was throwing strikes and improving on his position. He conveyed frustration and tried to convince the world that Miller was doing nothing at all, but that wasn’t the case.

In that moment I had a sudden realization that gave me pause: it is 2011 and Michael Bisping, despite now having over seven years of experience in this sport and five at its highest level, has absolutely no grappling game to speak of.

This is going to be a big problem when he moves up to the upper echelon of his division. Bisping is praised for his takedown defense, employing a strategy similar to the one popularized by Chuck Liddell. What fighters like Bisping and many commentators overlook, however, is that the style worked for Chuck Liddell because he had the knockout power that Bisping lacks and was an NCAA Division 1 wrestler at Cal Poly. Liddell had the grappling background that allowed him to hold his own and not panic if it did in fact go to the ground. And when he sprawled, it wasn’t with the idea to simply prevent being taken down, but to also get the fight back to where he wants it to be. Bisping’s takedown defense has improved, but is still only good enough to make it hard – but not impossible – for a good wrestler to take him to the ground. Once the inevitable happens, Bisping is still completely lost and at the mercy of his opponent.

Just imagine Bisping, who was overwhelmed by Miller’s competitive but comparatively mediocre grappling skills, having to fight someone like Chael Sonnen or Mark Munoz. As things stand now, he’d be smothered and pounded into the canvas.

Bisping’s next fight is speculated to be against Demian Maia, a Brazilian Jiu-Jitsu expert with an above-average grappling game. He can and will get Bisping to the ground, but unlike Miller, he’s going to be able to do something to Bisping.

It’s easy with all the resentments and apprehension that fans have towards Bisping to take him to task, but it’s not entirely his fault. As I’ve written countless times on this space, European and especially UK fighters have a severe grappling deficiency owing to the lack of competitiveness on lower levels and absence of high-level amateur wrestling programs. That makes becoming an MMA fighter and making the move to the highest level of the sport a precarious, if not dangerous, proposition. Paul Daley, Dan Hardy, and others have shown the same problems Bisping has: they are contenders until the moment someone with enough skill and gas left in their tank secures a takedown.

It’s not impossible for Michael Bisping to do something to address this problem, but the time to do so was yesterday and he faces an uphill battle. With children and a family to care for, Bisping won’t and can’t be expected to make the move stateside. But there has to be a sacrifice made somewhere if he or any other British fighter ever expects to hold a title in the UFC.