I covered Ares Promotion’s Fight Night 8 for the Knick Ledger tonight. The article should be posted tomorrow.

In the meantime, here’s the results along with some quick thoughts.

I’d estimate attendance at about 800. Roughly the same amount as the KO at the TU last month, but with the Convention Center holding a maximum of about 1,500, the place looked and sounded packed. It’s also worth noting that the fans and the card as a whole were worlds better. The fans were far less inebriated and far more personally invested in the bouts, and were every bit as invested in fights with no local fighter representation (accounting for over half of them) as they were with the hometown boys. The show started at 6pm and ended at about 10:40pm, yet flew by due to so many KO finishes and entertaining fights all around.

There seriously wasn’t a single dud on the card. I don’t recall ever seeing a better top to bottom fight card in boxing, local or otherwise. That sounds like hyperbole, but realize that boxing on the national and international stage are singular showcases; you’re lucky if you get one fight on an undercard that’s even competitive. Local promotions, then, have more of an incentive to put on an all-around card, since a local star is only going to draw so much. Though I think this went above and beyond that. I’d love to pick Adam Neary’s brain on this, because I suspect he takes a slightly more MMA approach to his matchmaking, which is to provide a top to bottom card that draws rather than just one or two marquee names and the rest sort of haphazardly thrown together.

Anyway, on with the results.

Welterweight bout scheduled for 4 Rounds:
Gabriel DuLuc (4-0-0, 1 KO) def. Calvin Pritchard (0-5-2) by Unanimous Decision
Judges Scorecards: Kintz – 40-36, Ackerman – 40-36, Schreck – 39-37
Thoughts:  I had it 40-36 for DuLuc. Prithcard was simply outgunned in this fight and seemed to be waiting for openings to land big shots, which unfortunately just didn’t have enough power behind them.

Light Welterweight bout scheduled for 4 Rounds:
Tre’Sean Wiggins (3-0-0, 3 KO) def. Dwayne Hall (2-2-0, 0 KO) via KO @ 0:28 of Round 2
Thoughts: This fight was all Tre’Sean and he looked awesome. He had Hall all but done in the first with a hard knockdown. Hall’s a tough kid. The KO that came in the second was almost a comically delayed reaction, as Hall actually stumbled two steps forward after the referee separated them from the corner then fell flat on his back. It was the closest thing I’ve seen to a Flair Flop in a real fight.

Welterweight bout scheduled for 4 Rounds:
Javier Baez (0-0-1) and Anthony Birmingham (0-1-1) fought to a majority draw
Judges Scorecards: Schreck – 40-36 Baez, Ackerman – 38-38, Lombardi – 38-38
Thoughts: I had it as a draw. It wasn’t a bad debut for Baez, who had a large and very vocal contingent in the audience, but he was really thrown off in the first two rounds by Birmingham’s reach and southpaw stance. He adjusted, but only enough to get a draw. My personal scorecard agreed with Ackerman and Lombardi.

Lightweight bout scheduled for 4 Rounds:
Zachary Smith (6-2-0, 1 KO) def. Ramon Santos (0-3-0) via KO @ 1:25 of Round 2
Thoughts: Santos won the first round, but expended way too much energy in doing so. Smith knew this and picked his spots well. Santos made the mistake of leaning too far in the clinch with Smith, who punished him with stunning uppercuts, which was the beginning of the end.

Super Featherweight bout scheduled for 6 Rounds:
Jamell Tyson (3-5-1, 1 KO) def. Chazz McDowell (5-1-0, 1 KO) via Unanimous Decision
Judges Scorecards: Schreck – 57-56, Ackerman – 57-55, Lombardi – 57-55
Thoughts: It was easily Tyson’s fight, but my scorecard varied quite a bit from what the judges had. Tyson scored his first knockdown late in the first round, which should have given him a 10-8. McDowell fought back in the second and won that round in my eyes, but seemed unable to fully adjust to Tyson’s unorthodox stance. Tyson had him in trouble a few times in the fourth round. In the first minute of the fifth round I was convinced it was over, as Tyson had McDowell out on his feet. McDowell was so out of it that he went for a clinch and ended up almost landing a double-leg takedown. I kid you not. The ref, for whatever reason, didn’t stop it or count it as a knockdown. The craziest part, though, is that McDowell somehow came back from that and won that round, which was wild. With that 10-8 first round, my card read as 58-55 for Tyson, giving him a 10-8 first round as well as a 10-9 in the third, fourth, and sixth rounds. I gave McDowell the second and fourth rounds. I suspect Schreck gave the third round to McDowell also, which I could see because it was close. But I can’t quite figure out how Ackerman and Lombardi came to their scores. They obviously only gave three rounds to Tyson. But then, how did they score the remaining? Did they not score the first round a 10-8 and score the fifth round a 9-9 because of how much trouble Chazz was in? That’s the only way I can figure.

Middleweight bout scheduled for 6 Rounds:
Markus Williams (9-2-0, 1 KO) def. Stef Scott (8-3-0, 1 KO) via Unanimous Decision
Scorecards: Kintz – 59-55, Schreck – 60-54, Lombardi – 59-55
Thoughts: I had it 59-55. The 60-54 from Shreck I totally get, as Williams was losing the fourth but rallied hard late (though I and the other two judges thought too late). Either way, this was one of those fights that was a much, MUCH better fight than the scorecards indicated. Scott fought hard, but Williams just walked him down and had greater confidence in his cardio. He came out like a man on a mission and never let up.

Lightweight bout scheduled for 6 Rounds:
Chris Finley (4-4-0, 4 KO) def. Brian Miller (8-2-4, 3 KO) via KO @ 1:24 of Round 1
Thoughts: Miller’s known as a late starter. When I saw who he was fighting, I was shocked. All of Finley’s wins are by a knockout and every single one of his losses come against highly touted undefeated prospects. That’s a recipe for disaster for a late starter who takes at least three rounds to get going. I give Smith and his camp all the credit in the world for taking the fight, but Finley came out like a madman (as I expected) and literally didn’t let him get a single shot in. 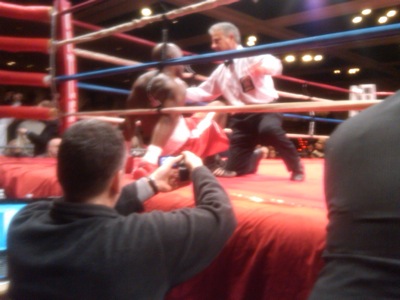 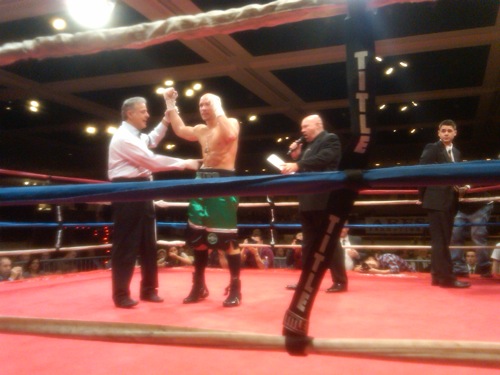 TROY WHAT?! Way to bring ‘em back, Shawn! (What do you want? I went to High School and train with the guy.)

Main Event, Middleweight bout scheduled for 8 Rounds:
Jose Medina (17-9-1, 7 KO) def. Mike Rayner (8-17-1, 5 KO) via Unanimous Decision
Judges Scorecards: Schreck – 80-71, Ackerman – 78-73, Lombardi – 79-72
Thoughts: Maybe it’s just me, but I had this going the other way, 76-75 for Rayner. Overall the judging was much, much better than any other local card I’ve attended, but I was still a bit surprised. Not that it went to Medina so much as it went so heavily to him (Schreck gave him every round). I gave the third, fourth, fifth, and sixth rounds to Rayner; first, second, and seventh to Medina. Eighth round I scored for Rayner as well, but he was deducted a point by the referee for a low blow (he’d hit two others previously and had been warned). It’s hard for me to call this a robbery, though, because a few rounds were close enough to warrant it and the crowd didn’t seem to (vehemently) disagree with the decision or the scores.

OVERALL:  Great goddamn card. What else can I say?