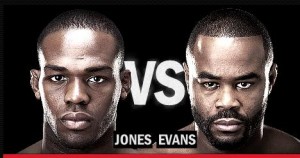 Tomorrow night is the long-awaited showdown between former stablemates Jon Jones and Rashad Evans for the UFC Light Heavyweight Title. Will the phenom Jones continue his ascendance, or will Evans play spoiler?

If he did, it wouldn’t be the first time. Even when Evans knocked out Chuck Liddell with an overhand right to win his first title in what was considered a huge upset, we should have known better. Evans thrives on the insistence people have in underestimating his skills and intelligence. It may seem ludicrous to call the consensus #2 Light Heavyweight in the world underrated, but it’s apt. Sure, he got caught against Machida, but it literally happens to the best of them.

I’m picking Jones, but I wouldn’t call an Evans win an upset. Not even considering that due to various injuries, Evans has only fought three times in the last two years. Because I know better by now, and you should too.

The full card, and my picks for the main broadcast: