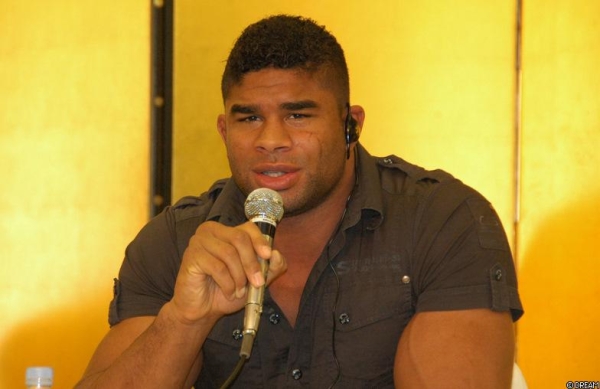 "Dear Mr. Kizer, Please excuse my son Alistair from having a 14:1 T/E ratio. He came down with an awful case of Limpdicktitis, which screws up his hormones. Signed, Epstein's mother."

I was all set yesterday to post something about how Ring of Honor’s television show was boring as shit, but then I read a partial transcript of yesterday’s Nevada State Athletic Commission hearing. I threw my hands up, said a curse word, walked away with my hands on my hips, stared at the ground, sighed deeply, heard my cat meow, looked over, followed her into the kitchen, fed her, came back, then saw it again and started the process all over again.

Well, except I didn’t feed my cat again.

The long and the short of it is this: Alistair Overeem is a goddamn cheater. We (and by that I mean those of us with half a fucking brain) have known this ever since he showed up for a fight in Pride as a skinny Light Heavyweight then in just two to three years was one of the largest Heavyweights in MMA. Of course he was on steroids. Nobody believed him when he told Ariel Helwani that he had gotten that way eating horsemeat, because why would they?

The counter to this is that “everyone is innocent until proven guilty.” Bullshit. This isn’t a courtroom, it’s an observation based on logic and the undeniable fact that nobody gets that big that quick and sustains it without the aid of PEDs.

Yesterday he was dragged before the commission to answer for a test failure where he registered an incomparable 14:1 T/E ratio. According to Dave Meltzer and Bryan Alvarez over at F4W/Wrestling Observer, Overeem’s people were on their third planned defense. The first they considered was the typical bullshit “Testosterone Replacement Therapy” exemption, but that fell apart when they couldn’t make the timeline work. The second was going to be that Overeem suffered from erectile dysfunction and that the medication he had taken for it registered a false positive. After being assured that this was medically impossible, they settled on the strange excuse that a cortisone shot administered by his doctor was, unknown to him, secretly laced with testosterone.

The Commission was satisfied. They denied him a license, but are allowing him to re-apply in nine months (just in time for the UFC’s New Year’s Eve show). Nine months! For having the testosterone of fourteen men! Based on an excuse they know was made up and is nearly impossible!

The Commissioners were all smiles. They commended his hack doctor, who has been disciplined in the past for illegally selling drugs over the internet, for his “superlative” testimony. They were polite to Overeem and his people to the point of absurdity. They all but said “take a break, go on vacation, relax, and be more careful when you’re cycling steroids, ‘Reem, sweetie.”

The worst part of this is that this wasn’t really a “surprise” test. When Overeem was granted his conditional license to fight Brock Lesnar last December, he was asked to provide a sample and hours later jumped on a plane to the Netherlands claiming that he was called home to care for his ailing mother. People insist she was actually sick, but the timing reeks. Not only that, but once he did provide a sample, he gave the wrong one. The Commission told him at that time they’d allow him to fight, but he had to not only pass a test before the event, but also another one sometime after the event. Not in a year, not in six months, not the night of his next fight, but sometime after. That time came at the press conference for UFC 146. It could not have been that much of a surprise to him when he knew they were going to test him and, in fact, they were required to based on the agreement he made with them.

So to recap: Overeem’s a complete idiot and his people aren’t much better. He’s not even smart enough to cycle out when he knows a drug test is imminent, and can’t even pass one by Nevada’s overly generous 6:1 threshold. Worse, though, is that the Nevada State Athletic Commission knew better and let him walk anyway, just like they did with Chael Sonnen and his ludicrous claim of needing Testosterone Replacement Therapy for medical reasons.

The Commissioners, Keith Kizer included, should be ashamed of themselves. Whether through nefarious duplicity or sheer incompetence, they’ve once again allowed combat sports to look even more corrupt than it is by implying they’re in on the transparent excuses provided by drugged-up cheaters. It’d be tragic were it not infuriating to know that this is coming from a Commission funded by taxpayer dollars that’s supposed to be providing industry oversight.

Just in case you’re not done being angry, here’s some more coverage and appropriate outrage to aid in making your head explode: