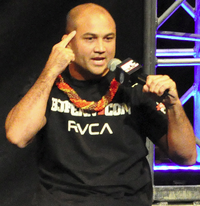 Well, that didn’t take very long, did it?

Just days after I included BJ Penn in my list of Fighters Who Are (Probably Not) Retired for Spike MMA & Sports, the consensus best Lightweight in UFC history is coming out of retirement in response to a public challenge from Rory Macdonald.

Macdonald claims he wanted the opportunity to fight Penn before he retired…even though Penn actually was already retired, or at least he claimed to be and reiterated it several weeks ago when asked about a potential fight with Josh Koscheck.

The fight will likely go down at Welterweight, which I’m sure will unleash an avalanche of trolls online griping about BJ ducking Koscheck but fighting Macdonald. But you have to remember that Penn’s walking weight when he’s active is actually below 170, and Macdonald is also on the smaller end of the weight class. Koscheck, on the other hand, is a strong wrestler (Penn’s kryptonite at 170) who could conceivably fight at 185.

Is that ducking? No, or at least not when you’ve accomplished as much as BJ Penn has. The guy may not be “retired” anymore, but he is at the twilight of his fighting career and it’s at a higher weight class than his optimal 155.

Just because he’s fighting again doesn’t mean another run at a championship at any weight is a realistic possibility, nor should it be an expectation. There was and is nothing in it for him to fight Josh Koscheck. Macdonald, on the other hand, is a fight he can conceivably win and would be an entertaining bout for fans. Koscheck would be a fight he’d likely lose and, stylistically, would be a bore to watch.

Semi-related but with less enthusiasm: Fedor is backing off recent hints that he’s retiring. That’s too bad.