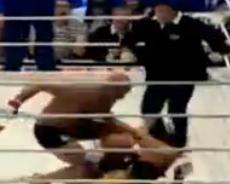 After an easy first round knockout of Pedro Rizzo, Fedor Emelianenko announced his retirement from MMA.

In attendance were Fedor’s entire family and Vladimir Putin. Because I’ve mentioned him, I’m bound by international law to reproduce this very real undoctored photo of him from a shoot with a Russian magazine:

Sassy, thy name is Putin.

Fight fans who came into the game late can never, ever understand why so many people – including myself – consider him the greatest heavyweight, if not the greatest fighter, of all time. If you only saw the shell that had trouble with Brett Rogers and lost to the likes of Antonio “Bigfoot” Silva, you missed out on one of the most dominant runs in all of combat sports.

Fedor refused to sign with the UFC, making ridiculous demands (or at least his management did) that prompted Dana White and the Fertittas to walk away from the table in disgust and, to this day, bury him and his legacy.

Even at that time, though, he was past what should be considered his prime. During that time period – I’d say between 2000 and 2007 – Fedor beat the best heavyweights in the world. To say he never fought a UFC-level heavyweight is a misnomer, because during that time period the UFC’s Heavyweight division wasn’t much to brag about. Well, okay, let’s not mince words: it. Fucking. SUCKED. Tim Sylvia was its champion, and let’s be frank, he’s gone downhill but isn’t a Hell of a lot worse than he was. Better heavyweights finally came along with the onslaught of new blood and veterans that migrated from the implosion and subsequent purchase of Pride Fighting Championships.

By the time serious talks had begun with Fedor, the man had little if anything left to prove. Anyone who deigns to suggest otherwise doesn’t know anything outside the revisionism of newer fans and jaded promoters.

On a sadder note, poor Pedro Rizzo. Fedor runs through him in a little over a minute and still decides “I don’t want to do this anymore.” How crushing must that be?