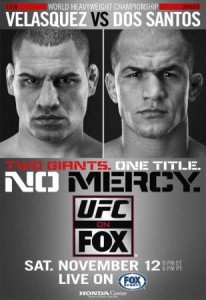 Joe Silva and Dana White are smart men. For their first fight on network television, they’ve chosen a bout that is all but guaranteed to be entertaining.

As Mike Chiapetta notes over at MMAFighting.com:

What, you don’t speak Portugese? Oh, fine. A translation:

”I gotta go with Cain. There’s no doubt in my mind. I just feel like Junior’s only going to have a chance to get in there and finish it quick, and if he doesn’t, it’s Cain’s fight. And I think Cain’s too smart to let it get into a total slugfest. I can totally see him taking it to the ground quickly and overpowering him.”

In his last fight, Cain shattered whatever was left of the Brock Lesnar myth. This is not to say Lesnar can’t or won’t be champion again, but Cain made him look human. Strip away the intimidation factor and you have a guy that, although bigger than Cain, was slower and physically weaker. Junior Dos Santos, because of his superior stand-up and conditioning, may be a more dangerous fight for Cain, but like I told Alexandre, I think Cain’s too smart and versatile to not take that fight where he needs to take it. Either way, it’s going to be a Hell of a fight, and in terms of quality and excitement you couldn’t ask for a better bout for the UFC’s network debut.

While the broadcast kicks off live at 9:00pm EST, the undercard starting at 4:45pm on the UFC’s Facebook page will also provide no shortage of interesting match-ups. Most notable is the semi-main event (for the live crowd at least) of former WEC Lightweight champion Ben Henderson taking on Lightweight stalwart and UFC veteran Clay Guida. Dana White has declared that the winner will get the next shot at Lightweight champion Frankie Edgar, which I take issue with in light of the absolute tear Donald “Cowboy” Cerrone has been on since joining the ranks and the fact that the #2 Lightweight in the world, Strikeforce Lightweight champion Gilbert Melendez, has a fight in two weeks that all but guarantees he’ll be in line as well.

Issues of rankings and placement aside, you couldn’t ask for a better fight than Henderson and Guida. Both are tough as nails, have cardio for days, and fight Japanese (a term I use to describe fighters who for better or worse let the momentum of the fight dictate their style). That said, one of the things that has made Clay Guida more successful over the course of the last year is that he’s fighting less wild and showing a bit more restraint when the leather starts flying. He’s still exciting to watch, mind you, but the difference now is that he dictates the pace rather than chasing after it. In addition to restraint, I thinke he also has an edge in strength and experience.

Surprisingly, Henderson is currently a 5-2 favorite on the books. Personally I think that should be flipped, but Henderson is also the type of fighter I would never put up money against.

More info and the full card is available over at the official site for UFC on Fox.