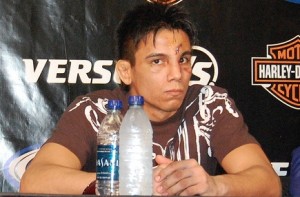 Miguel Torres was publicly fired by Dana White yesterday after White was blindsided by “Outside the Lines” host Michael Landsberg about an offensive rape joke that Torres posted to his Twitter account earlier in the day.

The tweet, which was originally said to be a reference to an episode of It’s Always Sunny in Philadelphia but Ariel Helwani later tweeted was from an episode of Workaholics that Torres was watching, was deleted and replaced with an edited version after Torres caught some heat for it online. Either way, Torres didn’t provide any context, and when Landsberg made White aware of it, he was furious.

This comes on the heels of the UFC on Fox 2 press conference, where Rashad Evans told his opponent, Penn State alumnus Phil Davis, that “you’ll be the first one to take a shot cause I’m going to put my hands on you worse than that dude did them other kids at Penn State.” White seemed amused at the comment initially, but later said he didn’t hear it clearly and that it was “a dumb thing to say” in light of the Sandusky controversy.

Immediately there was a cry of “double standard.” Rashad got a talking-to from Dana White, while Torres got fired by proxy. Seems unfair, right?

Well, it is. As much as people like Miguel Torres, he’s not a star like Rashad Evans. If you’re going to fire a guy to make an example, you don’t do it to one of your most recognizable faces that is, by the way, headlining your next event on Fox. It would be cynical and dismissive to just simply say “them’s the breaks” and that life is sometimes unfair, but MMA is no different than any other sport in this. If Tom Brady said something stupid during a press conference and a third-string linebacker later tweeted an offensive comment, you can guarantee that a similar scenario would play out. Brady would have to apologize and would get a talking-to, while the third-string linebacker would be sacked without hesitation (no pun intended).

The other thing to consider is that White was physically there with Rashad for the press conference, and could at least address it immediately and give the appearance of some degree of culpability and regret. With Torres, White was blindsided and embarrassed on a national stage (even if that nation was Canada). He didn’t even have the opportunity to say he apologized for his fighter’s comment, that his fighter wasn’t thinking, and that the issue was addressed. And as embarrassing as it was for Dana, it would have been even more so if, say, he had been asked first by a member of the American press. In fact, his first scheduled interview right after Landsberg was with Sports Illustrated, and I guarantee he was grateful it was in that order rather than the other way around.

It’s also worth mentioning that Torres has done this before. Dana was quick to say that Torres is an otherwise good guy and that there hasn’t been an issue previously. But as Cage Potato pointed out, he’s always been known by fans to tweet some fairly offensive, shock humor tweets to get a rise out of people, and specifically use rape as the subject (exhibit A, exhibit B).

The thing is, it’s not funny. And I don’t mean that from a standpoint of taking offense, but that it’s all just hack comments meant to shock, but none of them are amusing and rarely are they provided with context. The bottom line is that Miguel’s just not as good at being funny as he is at being a fighter. It reeks of desperation, insensitivity, and stupidity. We all know he’s better than that, but some guys just can’t help themselves until it’s too late.

I’m going to go out on a limb (okay, not really) and say that we’ll see Torres back in the UFC before the end of 2012. I don’t expect this to be a lifetime ban. I do, however, expect that the UFC is going to start sending more messages like this to their fighters to remind them that they have finally, after years of struggling to get the sport passed in several states, gained mainstream notoriety and acceptance. But with that comes the cost of being under a microscope. The days of MMA as a niche product are gone, and as much as fans like having access to their fighters and those fighters being genuine and forthright, sometimes – just like in day to day life – some discretion is necessary.