Call me old-fashioned, but if you’re a reporter that’s given a preposterous attendance figure for an event that you attended in person and covered for a major newspaper, it’s your duty and responsibility to at the very least express some skepticism. Like say, if an event held in the Times Union Center only had at best 700 or 800 fans present, don’t report that 3,527 people showed up.

I was at the same press table as Tim. I don’t know him enough to even say “he’s a nice guy, but…” so this isn’t anything personal. But there is absolutely no way in Hell there were a thousand people at that event, let alone that number he reported. That was the number, I assume, given to him by the promoter. That same promoter also claimed at the weigh-in that 6,000 tickets had been or would be sold.

Let’s look at the “center stage” layout that was used for boxing: 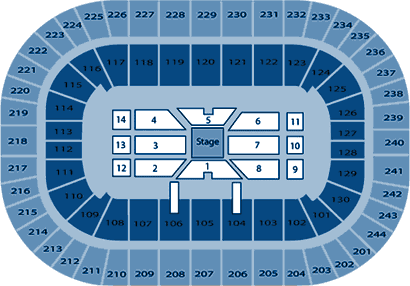 In the layout shown above, which is the layout used for professional wrestling and boxing, the maximum capacity is anywhere from 14,000 to 17,000.

First, take out the entire second tier. It was completely blacked off. Also, all those floor seats? They only laid out sections 1-8, and probably about three-quarters (being generous) of what’s shown there.

So already, knocking out those seats, we’re already at a maximum capacity was probably at or around 8,000. Meaning if that figure Wilkinson reported was accurate, it’d mean the arena was half full. But it wasn’t even close.

Let’s break it down further.

First tier: let’s say sections 101 to 110 were right behind press row (it was either them or sections 116 to 124). Those sections were littered with fans here and there, but were probably about 40% filled (again I’m being very generous). Opposite press row, sections 116 to 124, were about the same if not less. Sections 109 to 115 and sections 125 to 130 were more or less empty. On the left side almost literally; on the right side I would be very kind in saying there were forty people at most.

Then there’s the floor. Section two had six people in it. Sections 3 and 6-8 only had the first six or seven rows filled. I only passed Section 4 once and it was completely out of my line of sight, but when I did cross it, it had maybe a few dozen spectators seated at about the scheduled bell time of 7:30pm.

Taking all of that into account, there is absolutely no way in Hell there were 3,527 people at the arena that night. I wish there were, trust me. I think at the next event in April (it’s been announced as official), with more local talent and the presence of Evander Holyfield, they might meet that. But they did not on Saturday.

My initial and continued estimate of 700 to 800 people at this event on Saturday is, I’m being told by others who were there, me being kind and bad at estimating crowd size. Which, by my own admission, I am. Others have said maybe 1200 or so, which I’d accept. But given how many sections were all but completely empty and all of the empty space on the floor, that number reported by Wilkin is literally impossible.

Of course Star Boxing and the Times Union center is going to fudge their numbers. That’s what promoters do. I have no doubt that there were more than three thousand tickets floating around the area, given to businesses, etcetera. For the first boxing event in fifteen years and in a market like ours, you’d be stupid not to paper the Hell out of the show. It’s also not a disastrous result given the reasons I already cited and the need for Star Boxing to gradually build their brand and get fans acquainted with their fighters. As anyone from Ares Promotions to WWE will tell you, building a market for personality-driven combat sports and/or sports entertainment, it’s not a sprint.

But that’s where reporters are supposed to come in. Just because a promoter or venue reports an attendance figure doesn’t mean you can’t, as a reporter, use simple observational techniques and common sense to express skepticism as to its accuracy. In fact, I feel that it’s really your obligation to, and that Wilkin didn’t I can only attribute to him either being very distracted that evening or lazy.