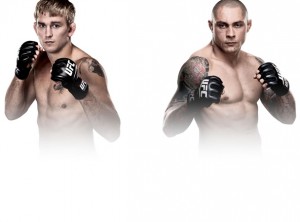 They're not dead or anything, this is just the image the UFC had for some reason.

Last Saturday’s UFC on Fuel TV card wasn’t seen by many (as of this writing Fuel’s available in about sixty-three households in the whole world), but as I alluded to last Friday, the overlooked card provided plenty of entertainment due to strong matchmaking.

Confession: I didn’t see a single one of these. The last fight ended up making the broadcast after the main event, but I’d already left the house.

Is it worth going out of your way to see a replay? Eh. Pickett/Page maybe, but I think you’re safe missing everything else.