The UFC has announced the full card for its first foray into the Far East in over fifteen years. 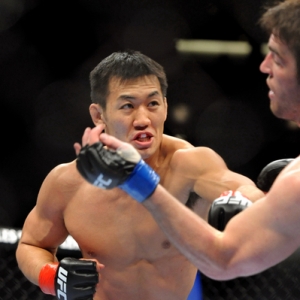 The fact that Yushin Okami is on the prelims despite being the country's best export and a legit Top 5 Middleweight speaks volumes.

In terms of pure entertainment value, it’s a decent card. People have been salivating in anticipation of Edgar and Henderson since the horn sounded for the third round of Henderson’s unanimous decision victory over Clay Guida. Mark Hunt, who has had quite an understated career comeback, has the right opponent in Cheick Kongo to guarantee a stand-up war. Quinton Jackson always provides some degree of entertainment, though I think this go around it’ll be relegated to pressers as Bader is on the larger end of 205 and Jackson’s at his best when he’s fighting leaner guys who can keep him on his toes and allow him to set up a highlight slam.

From a business standpoint, however, the card is a little confusing. The card has an early afternoon start time, which guarantees it’ll air as scheduled on pay-per-view in North America but will make it harder to move tickets for the live event.

An even bigger problem is that it also has all of its Japanese talent relegated to the undercard. Yushin Okami, who in my mind is the most successful Japanese export in UFC history, should arguably be in at least the semi-main event position. Jackson had his time in Pride, but you’re talking a gaijin who hasn’t been in the Japanese spotlight in about a decade versus a guy that the UFC and its Japanese PR could herald as a returning hero for his success. KID Yamamoto and Takanori Gomi are going to be seen, and have already been written off in Japanese media, as wash-outs fighting for their jobs.

The question is, does the UFC want to break into Japan or is their primary concern making a good face for the North American audience and breaking Japan into accepting their version of the product?

Zach Arnold over at Fight Opinion has some strong thoughts on the matter:

So, what did UFC do? They went the Vince McMahon route. Book an Americanized show that, for traditional Japanese fight fans, has no tribute to their past glory days or history. The matchmaking of the show does not touch on any past or present cultural themes. It’s just a straight-up UFC card. Now, in most other countries on this planet, this card is perfectly acceptable for a mid-range show. However, we’re dealing with Japan here and the Japanese are prideful people. You don’t have to be a rocket scientist to know that the Japanese want you to do business on their own terms and to cater to their tastes. They want a world-class card and themes promoted that deal with their natives winning on top. Why do you think Antonio Inoki forever and a day was successful at constantly beating random foreigners that he built up at Kuramae Kokugikan or Budokan?

Arnold hits on an important point (as well as many others from a business standpoint I won’t get into here but you should definitely read for yourself). This would be an okay monthly show and an above-average European card, but in terms of appeasing a Japanese market, it’s got some empty gestures and glad-handing littered in the prelims but not much else.

Thing is, I’m convinced that Dana White knows what he’s doing, even if I don’t agree with it. He’s aware that the Japanese market is an entirely different creature than the European market or, actually, any other market in Southeast Asia. You can bring the UFC product to more or less anywhere else in the world and, with some education and the right PR, it will sell. In certain ways, though, the Japanese are unique. As Arnold touches on in the above excerpt, they’re a prideful people. They also hold a strange and, to most, perplexing dichotomy: they’re a global economic powerhouse yet remain, in many ways, an insular and at times xenophobic island nation. Throughout the twentieth and twenty-first centuries, they have globalized purely on their own terms.

I can only speculate as to the mindset that went behind this card and what the UFC’s goals are, but I’m convinced Dana White and Lorenzo Fertitta are of the mindset that they can, with time, break the Japanese market. That’s not a typo; I don’t mean “break through” in the traditional sense. With the Japanese fight scene in a complete shambles (Arnold, again, recently wrote a fascinating piece on this), the UFC sees it as an opportunity to market itself as something completely different and re-educate the Japanese fanbase. 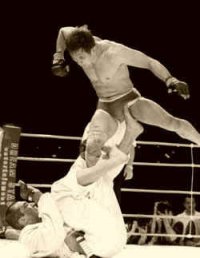 While it may be the wrong card for the Japanese market, it’s the right one for the UFC.  I think this card’s going to be a hard sell for all the reasons he outlined, but from the start of its international expansion, the UFC has been nothing if not consistent in their approach to exporting their product. If you watch a card in Anaheim, Philadelpha, London, or Tokyo, it’s going to be a UFC card.

Fans of the old Japanese cards will cry foul, but their objections betray a misunderstanding of what the UFC is trying to accomplish. You may, like Arnold, disagree with it. But, for better or worse, they know what they’re doing.

The last time the UFC was in Japan, it introduced Japanese and American audiences to a young fighter named Kazushi Sakuraba, a middleweight (185 pounds) who entered the heavyweight Ultimate Japan tournament with weights in his pants – literally – to break the 205 pound limit at weigh-ins. After a chaotic and tumultuous night that included a rare early stoppage from John McCarthy and subsequent overturn of the decision, Sakuraba was victorious and a new star was born. Fifteen years later, Sakuraba is a broken and aged fighter who fights with his legs taped up like a mummy and looks physically bruised and battered before the bell even sounds. He also, by all accounts, has not been paid for a fight in over two years due to the fact that the fight promotions that are left after the implosion of Pride in 2006 are hemorrhaging money, grappling with Yakuza scandals, and are all but invisible to the Japanese mainstream due to a lack of television exposure. In many ways, Sakuraba is the living embodiment of Japanese MMA, in both his representation of the ideal of what they call “fighting spirit” and his career trajectory running parallel  to the Japanese fight scene.

And, obviously, he will not be fighting at the Saitama Super Arena on February 26th.

The UFC seems to think now is the right time to march its product over the smoldering ashes of what constituted a fight scene in Japan. I don’t think it will take. But with deep pockets and nothing to lose except a little face with a miniscule portion of its audience, they’re going to try anyway.