With Turkey Day upon us, it’s time for us to count our blessings and give our thanks for all that’s right with the world of MMA.

Tom Lawlor’s entrances
Last Saturday, Lawlor fought in the last Facebook prelim against Middleweight phenom Chris Weidman. He lost (Weidman is on a tear and I expect him to be in a position for a title shot by the end of 2012), but he won our hearts with his latest entrance. Even better, though, was his turn at the weigh-ins where he showed up dressed as Steven Seagal: 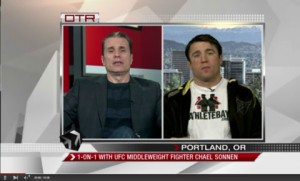 Sonnen  is an incredible creep, highly unlikable, a liar, a cheater, brash, and irritating. Thankfully, though, he’s also batshit crazy. This makes him at least entertaining, even when he’s being intolerable.

More “free” MMA than ever before
With UFC on Fox now behind us, we’re set to see more specials on Fox, Fuel, and FX in the next few months. As a bonus, they’ve learned their lesson from JDS/Cain, and Fox Network specials will have a minimum of two fights. It’s little consolation for those who decided to forego the Facebook prelims or didn’t know about them and missed a fantastic display from Benson Henderson and Clay Guida.

Too much MMA
One of the things MMA fans have complained about over the past year – and I’m certainly one of them – is burnout. At certain times the UFC has operated at a blistering pace, putting on as many as six events in as many weeks. Add that to the weekly (and fantastic) Bellator cards and it becomes a bit too much to take. But let’s put this in perspective: remember when we’d get a UFC once every six to eight weeks? Not only was the wait killing us, but if you’re like me and had the occasional obligation on a Saturday night and missed a card, you had to wait another month or two before you got to see a decent fight again. In that sense, maybe too much MMA isn’t such a bad thing after all.

More Fight of the Year Candidates in the next five weeks (or would be if Shogun and Henderson hadn’t fought last Saturday)
UFC 140 is just two weeks away – I know – and features Mark Hominick taking on the Korean Zombie, Chan Sung Jung, on the undercard. As star-studded as the card as a whole is – it’s a triple bill featuring Jon Jones vs. Lyoto Machida, Frank Mir vs. Antonio Minotauro Nogueira, and Tito Ortiz vs. Antonio Rogerio Nogueira – Hominick and the Zombie are all but guaranteed to steal the show. Then, just a few weeks later, we get Brock Lesnar taking on Alistair Overeem in the main event of UFC 141 and in the semi-main event a fight featuring two of the most aggressive Lightweights in the world, Donald Cerrone and Nate Diaz. And a lot of people seem to be sleeping on the main event of The Ultimate Fighter 14 Finale between coaches Michael Bisping and Jason “Mayhem” Miller, which I think is going to surprise a lot of people with its intensity. It could be a thoroughly competitive, entertaining affair. Well, so long as Bisping doesn’t stick his chin out and skip in a straight circle like an idiot.

Am I missing something? Probably. But clearly, there’s a lot to be thankful for and a lot to look forward to in the weeks, months, and years to come. So when you’re at your table tomorrow and your elderly grandmother asks you to lead the family in saying grace, take the hands of those next to you and tell everyone that you’re thankful to God and everyone else for the Minotauro brothers, the Korean Zombie, horse meat, and Mayhem.