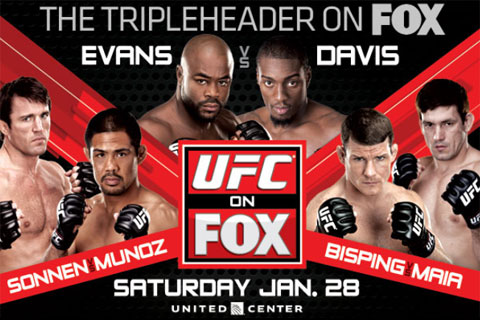 The UFC has released the full card (sans a couple prelims yet to be decided) for UFC on Fox 2 on Saturday, January 28th.

In addition to the previously announced main event of Rashad Evans vs. Phil Davis and co-main of Chael Sonnen vs. Mark Munoz, both presumably to determine the #1 contenders for their respective divisions, the speculated fight between Michael Bisping and Demian Maia will happen on the UFC’s second primetime network event.

Earlier this week, Dana White told journalists to expect another “big” fight, saying it would be comparable to the other two in terms of prestige and importance. I’m not quite sure Bisping and Maia is quite that important to the fans, but it is an important fight for Michael Bisping. White has also said in recent interviews that the two-hour broadcast is likely to include at least three fights.

Bisping will go into the fight just seven weeks after his dominant win over an out of shape and unprepared Jason “Mayhem” Miller at The Ultimate Fighter 14 Finale. Despite being in the UFC for seven years and compiling a 22-3 record, Bisping has only fought a Top 5 fighter twice in his entire career. The last time was the now legendary knockout loss to Dan Henderson at UFC 100 over two years ago. Before that, he lost a highly controversial and disputed split decision to Rashad Evans in 2007 at UFC 78. That loss, ironically, was the closest he’s come to beating a legitimate contender in any weight class; Evans went on two fights later to win the UFC Light Heavyweight Championship from Forrest Griffin before immediately being dropped by Lyoto “The Dragon” Machida.

The problem is that Bisping is British. No, I’m not trying to be funny, and no I’m not going to bore you again with my treatise on the grappling deficiency overseas. Rather, it makes him a commodity to the UFC that they have actively sought to protect, though they’d deny it and be able to provide circumstantial evidence to suggest timing has always been the issue. Still, the fact is that Bisping is easily their biggest British draw, and he’s important to maintaining a presence and further penetrating the British market.

But the UFC can only coast on Bisping for so long. His drawing power has been diluted by a resume that’s not quite as impressive once you get past his record. It’s certainly not his fault, since he seems eager to face better competition and has been making no secret of the fact that he’s getting restless and chomping at the bit to be given a chance to prove himself.

To an extent he’ll get that against Maia. A suspect chin has kept him out of the Top 5 at middleweight, and he hasn’t finished a fight in over two and a half years. He’s not facing the Maia that went on a tear after his UFC debut with five consecutive decision wins. But he’s still a lot more dangerous than Jason Miller, Jorge Rivera, and Yoshihiro Akiyama. A win against Maia goes a long way towards legitimizing Bisping at Middleweight and could, realistically, put him within one fight of title contention.

The rest of the card: