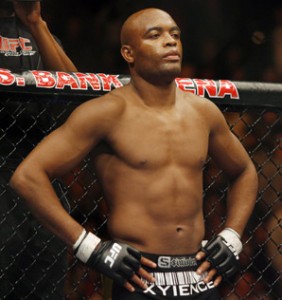 Ever get the sense that Anderson Silva is just bored with fighting? Crazy, right?

Chael Sonnen is convinced that Anderson Silva is afraid of a rematch. He tells people that, in his mind, he won that fight and that he’s the true Middleweight Champion.

It’s easy to dismiss that coming from Chael, though, because the guy’s a buffoon, a cartoon character, and a convicted liar. But when it’s coming from someone with more respect and consistency, such as Dan Henderson, people start to take it seriously.

Henderson recently went on the MMA Hour and told Ariel Helwani that he believes that Anderson Silva is, if not lying about, at least milking injuries to avoid fights with legitimate competition:

“[Silva] wants to ensure that he retires for the next how many fights he has without losing,” Henderson said. “Anybody that has a chance of beating him he doesn’t want to fight. That’s just my take on it. Obviously, Chael has show he’d probably beat him up if they ever fought again as long as he doesn’t get caught with something stupid at the end of the fight.”

Like anybody else who’s been watching the sport for more than five minutes, I respect the Hell out of Dan Henderson and value his contribution to the sport. But I don’t put too much weight into this, and I base that on my observation of Silva himself.

I personally don’t think Silva is afraid to fight Chael Sonnen. I don’t think he’s afraid of a rematch with Henderson, either, nor does he see anyone at Middleweight that provides a real challenge.

And that’s the problem.

Anderson Silva isn’t afraid of losing. In fact, he doesn’t think he’ll lose. I think he’s just bored. For the last two years he has appeared at times listless, agitated, and downright drowsy about the sport. He’s so good that he’s all but walked through fights with the likes of Demian Maia and Forrest Griffin, but having that great of a talent disparity at Middleweight means that you eventually get the mindset that you’ve done all that you need to do and no longer need to prove yourself. With that comes a diminished drive and desire to even get in the cage in the first place.

We have to start thinking about the possibility that it isn’t a case of Anderson Silva not wanting to fight Chael Sonnen. Maybe he just doesn’t want to fight, period.

For what it’s worth, preparations are being made for a fight with the winner of Sonnen vs. Munoz in the Summer, with the idea of it main eventing another card in Brazil.