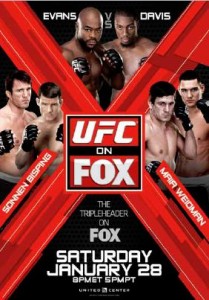 Well, so much for all that.

The second installment of the UFC on Fox delivered with some exciting fights, memorable finishes, and one of the better Lightweight fights of the past month between Evan Dunham and Nik Lentz.

Too bad all of that was in the preliminaries.

The reactions I read on Twitter spoke volumes and are the talking points for various websites this morning. What was the UFC thinking in putting this main card together? Why put so many grapplers on there? Isn’t that instant death for mainstream attraction?

My initial reaction was that the show was something of a disaster from a network broadcast standpoint. One follower on twitter asked if this could have gone any worse for the UFC. I semi-jokingly replied that all that was missing was a death in the ring, while another follower suggested that Maia could have just pulled guard for three rounds. He might as well have; I didn’t like what I’d seen of him and thought he’d have issues with Weidman, but I didn’t think his cardio would be that bad. It was a very rough start to what turned out to be a largely uneventful and taxing night for all but the most diehard fans.

Those who stuck through the plodding Maia/Weidman fight or missed it entirely were then subjected to a very underwhelming performance from Chael Sonnen, who got a Unanimous Decision win based on takedowns from Sonnen that went nowhere and did nothing to improve position. Bisping, to his credit and my surprise, was the better striker in the first two rounds and was actually more effective with his grappling defense and cage clinch. So much so, in fact, that he won it 29-28 on my scorecard. Sonnen’s excuse can and should be that Sonnen spent six weeks training for Mark Munoz, a different style of fighter. But to the mainstream fan who has to accept that this guy can somehow beat the best pound for pound fighter in the world, that’s a hard sell.

I thought and was hoping the main event would have gone better for Phil Davis, but Rashad Evans is just that good. My main concern about Evans and the reason I went with Davis is that he’s a bit undersized as a Light Heavyweight, but as I said before and I’ll resoundingly state again, it only makes what he’s able to do in there that much more impressive. As we expected he was able to outstrike Davis, but surprisingly he also outwrestled and overpowered a much larger former NCAA Division 1 champion. What others have been saying to me and the UFC’s matchmakers was proven true: Davis isn’t quite ready yet for that level of competition. Some guys just have to be brought along at a steady pace, and clearly jumping from fighting guys out of the top 10 to the #2 Light Heavyweight in the world was way too much to ask of “Mr. Wonderful.” On the flip side, I was impressed with his ability to hang in for all five rounds and felt he kept his composure despite what must have been a frustrating bout. It’s the type of fight that will only make him a better fighter.

As for Fox itself, I continue to have issues with its sports production. Red Cleatus fighting Blue Cleatus (I was hoping beyond hope we’d be spared the Fox Sports Bots) and Curt Menefee acting like the UFC was an alien race that just landed on our planet made me really miss Spike TV’s broadcasts.

My frustration could not match what the affiliates must have felt with that unnecessary overrun. To put it bluntly, Fox fucked them. They wanted to do an overrun to artificially jack up the rating, and did so by doing absolutely nothing the first quarter hour. When I say nothing I do mean nothing; Menefee talked to a charisma-less Randy Couture (great fighter, bad broadcaster) and a woefully unprepared Jon Jones about…well, nothing. They didn’t even show any pre-fight video packages until sixteen minutes into the broadcast. From a promotional standpoint, that’s inexcusably inept.

As a fan of fights, I wasn’t totally turned off. But I’m one of those diehards, and I’m also not as impatient when a fight goes to the ground as others are. Still, it was an overall frustrating broadcast, and someone needs to have a come to Jesus meeting, whether it’s Fox telling the UFC they need matchmaking that’s going to entice the casual fan or the UFC telling Fox it needs to hit the ground running and opt out of its usual bullshit pandering and bad habit of insisting professional athletes be broadcasters.