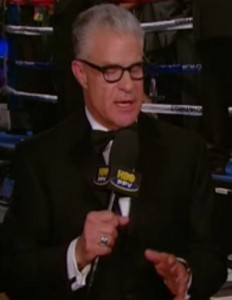 The judges at ringside: dumber than Jim Lampley's Ridiculous Glasses.

Making the performance of Florida officials on Friday night’s UFC on FX 3 card look competent would be a tall order for any Commission, but the Nevada State Athletic Commission was apparently up for the challenge.

In case you don’t know already, last night’s bout between Manny Pacquaio and Tim Bradley ended in a controversial split decision. And by controversial, I mean batshit crazy. After doing everything but taking out a gun and shooting Bradley point blank in the head for twelve rounds, two of the three judges gave it to the fighter that was outstruck in every round in regards to both volume and power.

The tempered reactions I’ve read have almost exclusively come from people who didn’t see that fight. If you didn’t see it, I don’t think you can appreciate exactly how bad this decision was.

Let me put this into a personal context: anyone who knows me and is a fan of combat sports knows that I’m not one to launch into hyperbole after a close decision. Quite the opposite, in fact, as I’ve gotten into some disagreements with people who have labeled a decision they did not agree with a robbery.

But in this instance, there’s no question. I have only two of the twelve rounds to Bradley, and I was being generous. The other ten weren’t even close.

I have never, ever, seen a worse decision, and I don’t think I ever will.

After the fight, Bob Arum dumped some dirt onto the fire by speaking out against the decision and announcing that the rematch in November wouldn’t take place in Nevada but would instead occur in a “non-tax” state. Likely Texas, as Kevin Iole speculated.

Iole also states that the controversy will only help, not hurt, boxing. I have to respectfully disagree. Particularly with fighters like Pacquaio and Mayweather who are likely to go the distance in their fights. If fans know they won’t see a finish by KO, they’re less likely to drop sixty dollars on a fight that they know will be better off left to the flip of a coin than in the hands of judges. It particularly hurts other cards, which were already suffering from a dwindling hardcore fanbase.

Between this and the absolutely ludicrous Therapeutic Use Exemptions being granted so fighters like Chael Sonnen can compete while using steroids, it’s been an embarrassing year for the Nevada State Athletic Commission. Their spectacular ineptness and speculated corruption is unprecedented. Something has to give here.

Fight Opinion has a collection of some of the reaction. The outrage here is warranted, folks.