Even though I maintain that the real money division in MMA is Light Heavyweight (it has been since the late 90s and will continue to be for the foreseeable future), the Heavyweights are still a major draw. People will always be impressed with big men who kick ass, plus it’s always re-assuring to see fighters that look more like you and me (re: only have a two or four pack at best).

This Saturday, the UFC’s doing something unique: an all-heavyweight card. Some injuries have occurred, naturally, that changed it up a bit and may have prevented this from being the supercard the UFC envisioned, but it still promises to be an entertaining evening of slobberknockers. 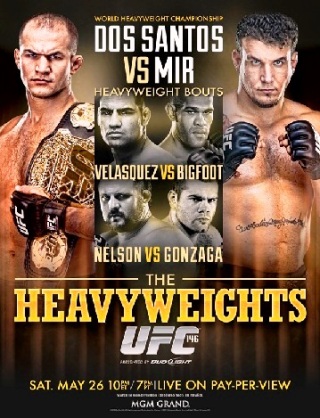 Gonzaga was literally on this card just long enough to get on the poster and fuck it all up.

* not the actual title of this show