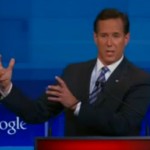 Rick Santorum, gay soldiers, and sexy sex in the military

A small controversy erupted at the Fox News/Google GOP debate in Florida last week when a now openly gay soldier submitted a YouTube question to the panel.

Donald Trump isn’t a candidate for President, but he plays one on TV

Entertainment headlines the last several weeks have been dominated by Donald Trump’s speculated Presidential bid. Trump has been everything from a bankrupt billionaire to a morally bankrupt reality television show host, and now he wants to be your next President of the United States.

Continue Reading →
"Error 403: Your IP is being rate limited by Twitter." — kevinmarshall