NEW! MANville Episode 53: the one where we find out Brendan Fraser went completely bald Newt Gingrich does not have a good relationship with The Blacks

In case you aren’t familiar, the Empire State Plaza Concourse is a cavernous corridor that allows State workers to traverse the entirety of the vast landscape of State government offices and agencies that Jon Hodgman from The Daily Show described as a “concrete shrine to Nelson Rockefeller’s vision of dehumanizing bureaucracy” (source). Or, if you prefer, it’s the post-modern version of that network of subterranean tunnels that housed the Morlocks from H.G. Wells’ “The Time Machine.”

As if it wasn’t strange enough already with its ridiculously high ceilings and everything from a miniature bus terminal to a gigantic McDonald’s combined with a high school cafeteria, an acquaintance of mine on Facebook (Kathleen Jordan) shared this notice that has been posted around areas where there’s constructions: 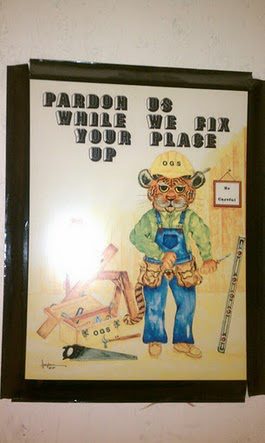 Where do we begin? The awkward grammar (“fix your place up”)? The fact that the choice of words suggests the work is being done by an outside, unexpected, and uninvited party? The strange pose the construction worker is taking? How about the fact that he’s a tiger of all things?

Whenever anything is under construction in the ESP concourse, the great state of New York feels the need to post these beauties. Look at it. LOOK AT IT. It’s looking at you.

What can you say? It’s not just a posting. It’s art.

To cap off the surreal, when I first saw this image, I had this song playing in my office:

I might have to re-up this song onto YouTube with just an image of that poster, along with absolutely no descriptor or explanation.