Please spare us the mournful tributes for Joe Paterno

Joe Paterno is dead, and I’d like to take this moment to ask many of you reading this to spare us the farcical tributes and forced empathy. 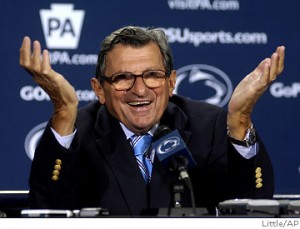 For decades, Paterno’s public image was the ambling, grandfatherly figure at the sideline of Penn State games. He was a throwback to a bygone era, when the sidelines were monitored without headphones and microphones and under the command of respectable old men whose scowl was maintained until the moment the final whistle blew. He became a living Saint in college sports because people wanted to believe in him and outlets like ESPN with a vested interest in maintaining myths and facades were all too eager to comply.

Then we found out he thought it was okay for little boys get raped.

Well…perhaps that’s not entirely fair. What really happened is that his pal and former assistant coach, Jerry Sandusky, engaged in unconscionable sexual acts with small children: molested them, raped them in showers, and not only destroyed lives but may ave created more monsters like himself. It was Sandusky that preyed on the young, the innocent, the confused, and the tearful.

Not Joe Paterno. All he did, when he was told about these awful things, was nothing. He decided that a slight inconvenience to himself and the Nittany Lions program was far too much to justify reporting a serial rapist. It’s not as if he stood watching with his hands in his pockets smiling while children as young as eleven years old and possibly younger were raped. Quite the opposite: he stood with his back to the abuse, smiling with his hands in his pockets while encouraging everyone else to look away.

Maybe he thought he did enough by passing the buck to another school administrator. And maybe if I see a building burning down with someone crying out for help from the second floor, I should just send someone an e-mail about it.

You get the point. What the guy did was awful and there’s no excusing it, nor does the good he did as the head coach of a goddamn football team undo all the awful things he allowed to happen. Unfortunately, we still have a culture that wants to forgive the transgressions of the dead out of politeness. Condemnation of the dead is seen by most as rude, disrespectful, and even sinful. Especially if they’re famous, because nobody would write such shallow and misguided tidings for Joe Pa if he drove a fucking bus for a living. Yet what I find truly distasteful is the hemming and hawing over a man who got to live a long, rich, full, and successful life despite the fact that left in his wake are an untold number of young men forever ruined by what he allowed his friend to do to children.

America is sick with Hero Worship. One of the symptoms is permission and forgiveness for all those associated with football to engage in terrible behavior and be deficient in dignity and human decency (unless it involves dogs, of course). In this case, it has made some very good people display some very strange sympathy for a man who deserves nothing of the sort from them.

Joe Paterno is dead, but do not mourn him. Mourn those that have to live with what he let happen.