Please Shut the Fuck Up About Your Blogs New show! The ‘Mericans of Comedy present: Hooray for the USA! Friday, July 6th @ 51 3rd 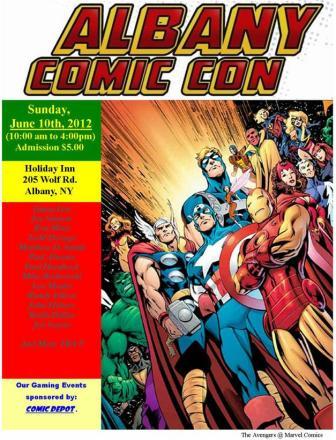 The Albany Comic Con goes down THIS SUNDAY at the Holiday Inn on Wolf Road in Albany.

Plenty of booths as well with great deals on trades and such. (I’ll certainly be scouring them for some stuff, in particular the second TPB volume of Gotham Central, which is becoming harder and harder to find and is sold out even among online vendors like Amazon who can’t keep them in stock. Which is frustrating but also great, because that book always struggled commercially when it was being published in monthlies but was adored by critics and its small but fiercely dedicated fanbase.)

But enough about comics.

One of the things I’ve learned in dealing with guys like Ron and especially the Con’s organizer, John Belskis, is how pathologically selfless they are. It’s all love and little money, as is evident by the incredibly low five dollar admission fee.

But their generosity goes far beyond a love for the industry and its fans and towards higher callings. To that end, the silent auction at the Con this year will benefit the local chapter of the Ronald McDonald House. Sketches will include work from Joe Sinnott, Paul Abrams, Fred Hembeck, and many more. It’s going to be their biggest collection yet for a silent auction, and there’s no fee to enter.

The press release for the silent auction (along with more details) is after the jump. And be sure to visit the official site of Albany Comic Con for more info.

The Albany Comic Con will host an auction of original comic book artwork to benefit the local chapter of the Capital District Ronald McDonald House Charities. Local comic book professionals have donated original sketches to the Albany Comic Con which will be auctioned the day of the convention in a silent auction. The auction will run from 10am to 3pm, Sunday, June 10th, 2012. Sketches of famous comic book characters including Batgirl, Supergirl, The Thing (from The Fantastic Four), Black Widow (from The Avengers), and more will be the highlights of the auction.  Sketches have been donated by such notable longtime artists as Joe Staton, Joe Sinnott, Lee Moder, Paul Abrams, Fred Hembeck, and many others. This is the third charity auction that the Albany Comic Con has held, and it is expected to be the largest in terms of the number of pieces of original comic book art available.

The mission of Ronald McDonald House Charities (RMHC) is to create, find and support programs that directly improve the health and well being of children. The charity’s core values include:

There is no charge to enter the auction and all of the proceeds from the auctioned artwork will be donated directly to the Albany Ronald McDonald House. The Albany Comic Con will be held Sunday, June 10th. Admission to the convention is $5.00. We invite local media to come out for this event, and we thank you for helping spread the word about the charity auction for a very worthwhile organization.

One Response to Albany Comic Con THIS SUNDAY; Silent Auction for the Ronald McDonald House