A Taste of Laughs on Lark – “Comedy Mad Libs”

One of the things we do at Laughs on Lark to keep the show moving and the audience engaged is a segment called Comedy Mad Libs.

Here’s how it works (in case you’re unfamiliar with mad libs): we write a set with blank words. Then we get a volunteer from the audience (July was Karlo who spells his name with a C but I decided was a K). Without seeing the set, we have the volunteer fill in the blanks by giving us words. Then s/he performs it.

It’s a chance for the audience to get a taste of our brand of non-stardom and have a little fun. Plus they win free prizes! This month was an OFFICIAL Jaye McBride coffee mug. 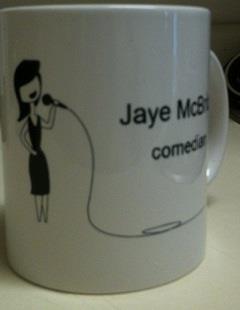 So to give you an idea of what you’re missing (look at that sweet mug you coulda had for free!), here are the prompts and the set created as a result of Karlo‘s answers.

(I know, I wish I’d save the original and just scanned it too, but I didn’t think to do this until now. GFY.)

Karlo’s answers were plugged into the set below:

Kourtney Kardashian had her baby. I FUCK babies!  And I hear her baby is already smarter that Khloe!

The Olympics are coming up. I like them. They’re the sports I like, but can only tolerate being around once every four years. Kind of like my friend JACKIE.

The TV show Breaking Bad is back this Sunday! That makes me ANGRY. I wonder if my teacher made MARIJUANA in High School. That would explain why he would always WALK after we had sex.

Fast food chain Slater’s 50/50 now serves a burger made entirely of bacon. I guess because they want the whole world to look like a CDTA bus stop in SCHENECTADY.

Thanks everyone, my name is CARLO and attention (ladies or gentlemen), the doctor says that my Syphillis isn’t contagious right now!