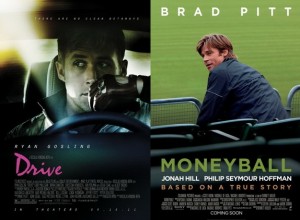 Note – my ratings, which are as arbitrary as any other and as such should probably not be obsessed over, are done on a scale of one to five stars.

On the surface, the two films I saw this weekend bore little resemblance to each other. In fact, one wouldn’t even place them in the same genre. “Moneyball,” based on the best-seller from financial reporter and non-fiction writer Michael Lewis, tells the story of baseball general manager Billy Beane and his revolutionary approach to scouting and player evaluation that made a ball club with one of the lowest payrolls in Major League Baseball into perennial contenders. “Drive,” based on a 2005 novel by James Sallis, is a heist film based around an assuming, anonymous character (we never do learn his name).

Yet they mirror each other in many other ways. Both focus on male protagonists engaged in pursuit of redemption. They maintain a cool and calm veneer for others, but explode in acts of rage and violence. With Billy Beane, the outbursts don’t cost someone the use of their hands or their head, but they do include him destroying a clubhouse with a baseball bat and terminating the employment of players, scouts, and coaches when they don’t follow the plan he’s laid out for them.

The films also carry thematic similarities. Both are character studies that explore the ethical murkiness of the respective protagonists. Beane is ultimately doing the right thing for baseball and the Athletics organization in particular, dragging baseball kicking and screaming into the twenty-first century and making a small team with a loyal fanbase competitive with teams like the Yankees and the Red Sox. Yet we learn early on that there is a concession that must be made with this approach: if players are numbers, one must be able to remove them from the equation without hesitation if they don’t fit. The Driver (as he is noted in the film’s credits) resides in a world where crime is both a profession and a past-time. He’s attempting to better himself and helps his new neighbor out of affection for her and her child. But they, too, are caught up in a world where knives and guns are as common as forks and knives, they just don’t realize it until it’s thrust in front of them in violent fashion.

As such, “Moneyball” and “Drive” rely heavily on moral relativism to sustain empathy for the protagonists. Their destructive actions permanently injure lives and end them (career-wise and literally, respectively). These aren’t concessions that are made along the journey; they are requisites in order to fix the situations both have found themselves entrenched in.

They’re also remarkably quiet movies. The best moments for Brad Pitt (Beane in “Moneyball”) and Ryan Gosling (the Driver in “Drive”) come when they don’t say a word and barely move. The camera makes us sit with them and think, and through their performances they guide us through their respective thought processes. The directors (Bennett Miller of “Moneyball” and Nicolas Nicolas Winding Renf of “Drive”) have made reflective and simply gorgeous films. Their education and experience are separated by an ocean: Miller is an American filmmaker, Refn is Danish. Yet they share the same Danish sensibilities that perfectly meld art and escapism, like romantic poetry with a club beat behind it.