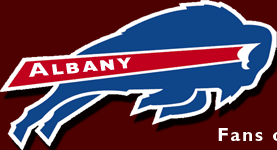 Before the Buffalo Bills’ big test against the New England Patriots last week – one which they passed – Times Union Sports and Features writer Jennifer Gish wrote an article that was published in print and online titled “Bills fans need help keeping it real.” The article was intended to be tongue in cheek, but took a very sardonic, cruel, and mean tone that is unfortunately what passes for satire with those who have the unfortunate task of attracting eyeballs and traffic, particularly in that newsroom. She quoted Bills fans and painted them to look ridiculous and foolish. Which in hindsight was a bad idea, particularly with the inclusion of an elderly woman.

Then came the backlash. It being sports, the assholes and anti-social media gurus came out in full force on Twitter, through e-mail, and on blog comments to issue veiled threats, sexist remarks, and downright crude insults towards Gish. It’s ugly stuff and one of the many reasons why I steer clear of sports culture on the whole. (I’ll use this opportunity to note that you would be absolutely floored at how much more civil and respectful MMA blog comments and forums are compared to team sports, and I encourage you to check out my MMA blog Mixed Marshall Arts.)

Gish definitely did not deserve those comments. Even the stuff “suitable” for print was abhorrent.

There’s another issue here, though, which has gone largely ignored but has created quite a stir in certain circles in Albany, including many that I cross with.

Gish told Bryon McKim, one of the fans she quoted in the article, that she was doing a piece on the Bills 2-0 start to the season and their (then) forthcoming game against perennial contenders the New England Patriots. The following is the e-mail sent to him, which he posted on the Bills Backers website along with his response to the article:

“Hi Bryon,
I write a sports column for the TU, and am looking to talk to some Bills fans this week in light of the big test against the Patriots coming up. Can I interview you for it? If you can send me a number and best time to reach you I could call you tonight or tomorrow. I’ll also be reaching out to some of the other ABB. Thanks!
Jennifer”

According to Bryon, the tone of the interview was light and he was given the impression that an entirely different piece was being constructed than what was eventually published. Which, as Lydia Kulbida pointed out on her blog, sometimes happens. What isn’t acceptable is that she took his quotes out of context to make him look foolish, shoving him into a media pillory and embarrassing him on a grand scale. She never gave the impression that she would use anything resembling the tone and slant she ended up with, and when confronted about it, she replied to him and said that she told him that the article was going to be about the fans needing a reality check.  Which is flat out not true: the only reference to a “reality check” was when she asked him if the game against the Patriots was going to be one for Bills fans.

In short, Gish intentionally misrepresented her intentions. Which, regardless of the unnecessary vitriol she received after it was printed, was wrong. Sometimes, in the thick of working on a piece of investigative journalism, some fenagling has to be done in order to get the information you need. But this was a fluff feature piece intended as humor (though woefully lacking in the finer points that separate satire from straight-up ridicule).

Again, you can read Bryon’s full response at the Albany Bills Backers’ official site. As a follow-up, fellow Bills Backer Ed Lass (disclosure: we’re BFFs) touched on one of the many problems with local media and their relationship with readers:

Newspapers are in a tough place. A Pew Research Center study earlier this year tells us that only 31% of Americans consider a newspaper to be a main source of news in their life. This is down from 45% in 2001. The internet provides news to 41% of Americans while TV still dominates with a 66% share. (Before all you math whizzes point out that this is greater than 100%, I’ll just say that Pew allowed people to choose more than one main source of news. Less than a third still chose the newspaper.)

Agreed, and what occurred here is one of the many reasons why this shift has occurred. Newspapers are getting desperate. Desperation brings attention, but it rarely brings anything resembling trust or admiration.

Ed also (rightly) chastises those comments and urges any of those reading to retract them. But he also touches on a salient point that I myself have been grappling with since this whole thing exploded:

On Twitter, Ms. Gish’s colleague Kristi Gustafson Barlette reports that Jennifer has been the target of “classless name-calling and physical threats.” I haven’t independently verified this, but I don’t condone it, and I hope it’s not coming from Albany Bills Backers who read Bryon’s call to action. If you’ve ever read the comments sections of the Times Union blogs, you’ll learn that TU readers are some of the most crass and vile people you’ll never meet. Apparently some of them are also the same Bills fans that I explained have moved here. I regret that. If anyone reading this has had a hand particularly in threats but also in name-calling, I would ask you to please retract the comments. An eye for an eye makes the world blind.

The emphasis in bold is mine, not Ed’s. He’s not making the following point, but I will.

For far too long the Times Union, in its attempt to circumvent shrinking circulation and growing pains associated with the transition to 21st century media, has perpetuated and condoned the sort of ugliness that led to what happened with Gish. This is not to say she or other individuals are culpable for the inexcusable behavior of others, but it does make it more likely for people to jump over that line when a major newspaper blurs it by allowing comments to see the light of day that contain personal attacks and blogs from staff members that openly ridicule people a la “People of Wal-mart.”

I don’t mind telling you right now that I tried my damndest to deep-six all of that, and if I did let it through I made it a point to let them know that it wasn’t welcome or condoned on my space. But that’s because I want a better, not bigger, audience. The Times Union, unfortunately, doesn’t feel it has the luxury of that choice. Which is a shame for everyone. Especially the readers, who whether they are cognizant of it or not are the ones that suffer the most when local media takes the low road and compromises its value and integrity for the sake of SEO.

The bottom line, though, is that nothing before or after that article was written justified tricking regular people into making fools of themselves at the highest level of local media (and vice-versa lest anyone accuse me of condoning the attacks). What occurred with that article only encourages skepticism and distrust towards the press. Which is probably why Mike Huber’s well-intentioned offer to host a Bills Backers blog on the TU site will likely go ignored.

They’ve already been burned and seen others burned too. Last thing they want is to climb into the oven.