Bonus Troy Night Out this Friday, October 14th The Panacea that failed: Michael Century on art, technology, and EMPAC 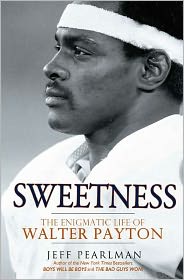 Celebrated author Jeff Pearlman, whose books include the Roger Clemens retrospective The Rocket That Fell to Earth and The Bad Guys Won, has a new book out on legendary running back Walter Payton. The book is called Sweetness, borrowing from the moniker bestowed on him during his days at Jackson State University, and in its 430 pages it explores and uncovers details of the legendary running back’s life that even members of his own family were not privy to. It’s a revealing look into the life of a complicated but remarkably intelligent professional football star who was much more than the deified figure created by the media and perpetuated by a naive fanbase.

Last week, Sports Illustrated ran an excerpt from the book that enraged sports fans, particularly those in the Chicago area. It was taken from later chapters in the book , when the abuse of a twelve year career full of hard hits and a physical, smashmouth style of play resulted in a dependency on perscription pain medication simply to get through the day. It also details his failing marriage, which culminated in an awkward scene involving both his wife and his girlfriend insisting on being present at his induction into the NFL Hall of Fame in 1993.

The information shocked fans who had fully invested themselves in the well crafted media persona of a gentle, quiet, reserved faimly man who was a monster on the field. Even though the excerpt only showed a small glimpse of his life and out of the context of the biography as a whole, Pearlman was immediately villified by fans, former teammates and associates of Payton, and even – shockingly -members of the media.

Mike Ditka threatened to spit on him if he saw him. Fans bombarded his Facebook fan page with insults, threats, and demands that he specifically answer to them for the words he had written that none of them had read. The kicker, though, comes in the form of an ESPN.com column from Washington Post columnist Michael Wilbon:

The point isn’t to question Pearlman’s accuracy, but to question his purpose in writing the book. What’s the literary mission here?

I’m tired of journalists, under cover of painting a complete portrait, deciding the world is a better place for knowing whom public figures are sleeping with. This isn’t news, it’s pandering, especially when the man in question has been dead for 12 years and can’t defend himself (something I thought Payton paid Bud Holmes all those years to do).

Now, before you and I jump all over Wilbon, I urge you to do what he didn’t do: go and read his column in full. Give him the fairness of context that he, which he himself admits in that very column, did not give to Pearlman in his condemnation of Sweetness.

Now, let me just say that with all due respect to Michael Wilbon, it’s complete bullshit and unbecoming of a journalist to question the motives of Pearlman and to shame someone for writing a thorough historical account one of the most famous athletes in the last fifty years, particularly one that he himself notes has been dead for twelve years.

That last point Wilbon uses to chastise Pearlman, but for me it’s both a defense and an explanation.

Walter Payton is and was one of the highest profile professional athletes of all time. I’m always loathe to commisserate with sports fans who feel a sense of entitlement from an organization or especially an individual. But on that same token, guys like Payton are more than a guy who throws or catches a ball. He’s transcended and become a part of American society, culture, and history.

I wouldn’t be as dismissive as to suggest that if Walter Payton never wanted the details of his personal life disclosed well after his death, then he should have joined a flag football league on weekends instead of making a career of it. Yet there’s a very valid point hidden in the snark. To truly understand a person and their role in any area of our culture, a thorough examination is necessary. Can Pearlman or any writer or journalist worth their weight be expected to smudge facts, omit relevant information, or otherwise mythologize history so as to not offend people whose loyalty is to a brand name rather than to anthropology and culture? Long after they’ve passed, should Payton and other relevant figures be painted as the myth we wish they were or the men they were?

I’m sure many reading this will dismiss the idea of Payton being such an important figure, but to do so is to discount the role that professional sports \played in the development of American society in the 20th Century and continue to play in the 21st. Wilbon himself, like so many other sports writers, waxes poetic and lends grand importance to the game and its players. In the response to the book he never read, Wilbon described Payton’s play as deserving of artistic considerations. If we’re going to respect the game enough to lend it that sort of weight in our lives, we selectively omit other aspects of the game and its players just because they don’t fit into our fantasy construct. The point of the book is that Walter Payton was not a perfect man, but Pearlman has maintained throughout the process that he feels he was a great man. Great men come in all forms. What makes them great is not what we imagine them to be, but what they are, warts and all.

The backlash against Pearlman and assault he’s received from those who would consider themselves fellow journalists has left me perplexed and frustrated. I know that I shouldn’t be surprised when we live in a state of fluctuating standards and an inclination towards revisionist history. But I feel that we owe it to ourselves at all levels – as writers, journalists, scholars, scientists, anthropologists, what have you – to be honest, thorough, and relentless in our pursuit of truth and understanding. That holds true whether we’re talking about a former President of the United States or a legend in the most popular form of sport in the United States.

“Never die easy” was an idiom created by Payton himself to explain his style of play and the life that he lived. In that he was honest, even if we couldn’t see the full scope of the truth.