Reaction to a book about the life of Walter Payton is unfair to his legacy Photos of Sara: Failing at funny or succeeding at stalking?

The Panacea that failed: Michael Century on art, technology, and EMPAC 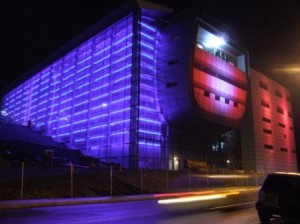 I usually spend my lunch eating a peanut butter and jelly sandwich and trying, in vain, to get some writing done. It almost always fails. I’m never in the right mindset for it, so I end up frstruated and I return to my office in an even more miserable state than I was before, trudging through stacks of unnecessary paperwork and cursing both the tasks at hand and their stifling of my creative output.

So when Daniel Nester called me yesterday and suggested I meet with him to attend a lecture by new media and music professor Michael Century at EMPAC‘s main theater, I jumped at the opportunity. It was the second in a series of three lectures exploring the relationship between technology and art, starting at the turn of the 20th Century and continuing into the present day. Yesterday’s lecture, “The Panacea That Failed,” covered the period starting with the post-war years and ending in 1974.

EMPAC’s website described the talk as one that “balances the celebratory heyday of art and technology against a rising tide of disillusionment and media-archelogocial irony.” It was grad school academia to a point of self-parody, particularly with Century’s nervous delivery and steadfast refusal to avert his eyes from his lecture, which rather than being outlined in notes was obviously written out in full and simply read aloud. Not that I fault him for it, since I imagine his workload is already heavy as it is without pseudo-intellectuals like me popping in during our lunch break.

The lecture spoke to the inherent trials and tribulations associated with this relationship and for EMPAC’s visiting and resident artists. Linking the two is a wonderful idea in theory: making the artist more practical and the mechanical more human. On the surface it makes perfect sense. We cannot have art without science and technology, nor can science and technology expand and evolve without some inclination towards creativity. But to treat the two as potentially equal partners in a project is a fool’s errand, particularly when you try to put the emphasis on technology and expect the end result will somehow lean towards art. It’s a misguided attempt to legitimize one field in the eyes of the other by appealing (pandering?) to the latter’s sensibilities. More often than not, it results in experiments that become something resembling clumsy stunts, briefly intriguing but not much else. At least, this has always been my belief and observation.

Call it confirmed bias, but I felt it was reinforced by Century’s presentation. He discussed and showed the work of artists like John Cage, who at one point abandoned control as his method and sought to fully automate the process of composing music. Footage from this period shows fellow artists and cultural icons looking on as Cage performs this work. Joyce Carol Oates is seen looking unimpressed to a hostile degree. I look over to the sound engineer, sitting three rows in front of us, and he is removing tags of himself on a Facebook picture that identifies some unknown person’s allegedly best friends. Then, as Nester leans in to ask if that is indeed Oates who looks so terribly unhappy with the results, I feel something on the tip of my index finger and realize the pen he loaned me has bled open and deposited royal blue ink all over my index and middle fingers. Eventually all technology fails the creative mind, whether it be on the cutting edge of science or the rudimentary tools we take for granted. One must always be prepared to improvise. The engineer maintained the cleanliness of his profile by removing himself from the clumsy digital collage. I was able to retrieve a pen buried deep in my bag that I had forgotten about. Cage abandoned the attempt to divorce control and re-married the compositions that brought him his greatest success. And there we were, in different rows and eras, back in control of our own output to the world.

The idea of putting emphasis on the influence of technology on the artistic process is a consistent theme at EMPAC that’s admirable but nigh self-defeating. My reaction to the vast majority of performances and exhibits at the facility are that the ideas are art, and perhaps to a greater extent the process that the artist(s) undergo can be considered art. The end result, however, usually is not. Naturally we can get lost in a circular argument and debate the merits of deciding what is and isn’t art. But taken on their own, without the context of process and intent, many of the works say nothing. They may incoroporate mechanical components, but most fail to move the audience in any meaningful way. The irony, or perhaps it’s more apt to call it a cruel joke, is that the artist should recognize and identify with such a beautifully self-destructive process and self-fulfilling prophecy.

As I take notes on the sad but noble efforts, Century touches on another project where 75 artists were commissioned by industrial firms to create cutting edge exhibits. Only 15 of them were deemed good enough to be displayed to the public.

When Century broaches the realm of computer animation, the crowd in the theater shifts in their seats. With the passing and subsequent (and at times truly baffling) deification of Steve Jobs still fresh in their minds, thoughts turn to Pixar. Century tells us about early pioneers like John Whitney, who re-purposed military technology to create film animation, and the groundbreaking but tyrannically post-modern theory of Ivan Sutherland, who strove to develop a system wherein eventually one could simply push a script in and the computers would do the rest. My thoughts throughout turn to a conclusion Pixar themselves reached in the development of their breakthrough film “Toy Story” and continue to preach to their employees and the public at large: that above the slick renderings, it is the creative minds within the organization and the fierce adherence to integrity of its artistic direction that has been the key to its success. The devaluing of human input and the “aesthetic virtue” as Century coined it – humanizing technology to alleviate Cold War anxieties over a loss of control and influence on the world around us – was doomed from the beginning. 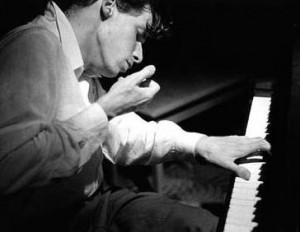 The third act of the talk focuses on Glenn Gould, the legendary Canadian classical pianist who specialized in Bach and whose contempt for most piano music composed in the Romantic period was matched only by that of the live audience. He theorized, amongst other things, that live performance in a concert hall had not only become antiquated but was stagnating creativity and inhibiting the emotional relationship an audience has with a piece. It was his belief that music was moving away from live performance and towards personal absorption through media.

Nearly thirty years after his untimely death, that last part has been strangely prophetic. The number of acts that can legitimately sell out large venues is dwindling, with those that can relegated to nostalgia acts marketed towards an older audience that hasn’t caught on to 21st century technology or maintains their own anxieties about mp3s and music players. For modern acts, larger venues can’t be filled because most people can’t fill their iPods with enough mp3s. There are other factors at play, including but not limited to an increasingly micro-managed method of socialization through status updates and  posts of 140 characters or less. The point is that it may not have personalized the experience in the way Gould envisioned, but it has at the very least isolated it.

But he was right for the wrong reasons. The most glaring counterpoint to his argument isn’t presented through words but rather a video of Gould himself playing piano in the studio. As he performs, he moves his head with manic intent and opens and closes his mouth to the rhythm in an uncontrollable tick. The output moves him, and I feel him through the film some thirty-seven years later. It is infinitely more unique and fascinating than the music he’s performing. It is this aspect of performance that Gould tragically overlooked. He thought of music in singular terms of auditory reception as the only means of achieving an emotional connection with an audience. His ideas about the medium were not theory, but rather a symptom of social anxiety. And what a damn shame it was based on what little I saw.

Gould’s words made me think of our more contemporary attempts to marry technology and art, and how it often betrays a misunderstanding of what art is and can be. The focus cannot be on the tools provided by the sciences and technology. The moment an artist does this, s/he betrays the art itself and weighs the work down with something cold, distant, and unmoving. It instills in me a greater respect for the uphill battle artists at EMPAC face, but it also gives me a greater understanding of why so many events at the facility have trouble attracting an audience.

The penultimate clip of the lecture was a segment from a documentary where Gould spoke with the great Canadian thinker Marshall McLuhan in 1974. As they discuss Gould’s idea of eliminating concert hall performances, McLuhan becomes dismayed. He asks him, defending what he views as the strength and value of the human experience, what would become of human beings if they stopped climbing mountains and instead were content to watch film of others accomplishing the feat. Gould’s unsympathetic and puzzled response is that it would be worth celebrating that we climbed the mountain at all.

McLuhan responds with a loud gasp and looks at Gould with heavy eyes that I could have sworn were welling up with sympathetic tears.

“Oh, Glenn,” he says as he trails. I read his reaction as two things. One is a realization that, as stated earlier, Gould’s response is more reflective of his own innate sadness and inability to overcome his personal demons. But I also think it’s possible, in that moment, that McLuhan felt a pinge of the fear that this prophecy may, at least in part, be fulfilled in the years to come.

It would be unfair and inaccurate to describe EMPAC as Glenn Gould’s dream or Marshall McLuhan’s nightmare, but it does speak to the precarious nature of this unique facility and the tiny human dots that litter its vast landscape. It can help us to accomplish some truly wonderful things, but it is just as easy for the artist to become completely lost in it.

4 Responses to The Panacea that failed: Michael Century on art, technology, and EMPAC