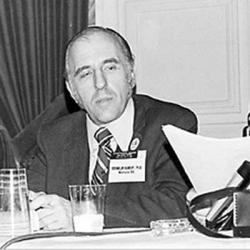 If homosexuality is still struggling for acceptance in modern society, it was verboten if not a capital crime in 1957. That was when Frank Kameny was fired from his job at the Army Map Service due to the discovery of an earlier arrest (resulting from entrapment) in a mens room. He fought back and became an early and continued leader for equal rights.

Closure wouldn’t come from the singular incident until June of 2009, when an openly gay man was appointed as the director of the Federal Civil Service. Kameny was invited to the swearing in ceremony, where in a prepared speech he was given a full apology and the promise of a better tomorrow.

But he did more than stand up once. He continued writing, advocating, and speaking right up until his passing last Tuesday.

From The New Republic:

The gay rights movement is widely considered to have begun with the Stonewall Riot of 1969, when, rather than succumb to police intimidation as they always had before, a group of patrons at a Greenwich Village gay bar fought back. “Stonewall” has become enshrined in American history as the Lexington and Concord of gay rights. But this reading of history gets it wrong. While Stonewall was indeed a seminal moment, the movement would never have found its footing had it not been for the tireless and courageous actions of Kameny, whose work began over a decade earlier. Essentially blacklisted, he devoted his life to the cause, never reconsidering the choice to do so because, as he told the Washington, D.C. gay magazine Metroweekly several years ago, “I’m right and they’re wrong.”

I am glad he lived long enough to see a nation apologize to him, New York pass marriage equality, and the United States military repeal “Don’t Ask, Don’t Tell.”

Frank Kameny was the greatest kind of American. To say he will be missed would be to provide a disservice to his efforts and the changes he ushered in.

One Response to The passing of a truly great American: Frank Kameny, 1925-2011