Photos of Sara: Failing at funny or succeeding at stalking? The passing of a truly great American: Frank Kameny, 1925-2011

This is not a book a young man would or could write. There is the sense here of somebody who has seen and considered much, without letting his inner fire cool.
– John Sayles on William Kennedy’s Chango’s Beads and Two Tone Shoes in the Sunday Book Review (The New York Times 10/02/2011)

Author and filmmaker John Sayles gives William Kennedy’s new book Chango’s Beads and Two-Tone Shoes the sort of enthusiastic and awe-inspiring write-up you’d expect for the latest work from a Pulitzer Prize winning novelist. Except Kennedy is 83, and the wonder here is that this book is even more exciting and energetic than his earlier works, such as the half-fiction biography Legs and the award-winning Ironweed.

I’m nearly done with it. It’s written in a disjointed fashion, going first to Havana in the late 50s then Albany in the late 60s, then back and forth and back and slightly forward then back and then forward again. It’s a device that should be jarring, but Kennedy is a master and he keeps the narrative linear even when the time frame isn’t and the characters are revisited at wildly different points in their arcs. 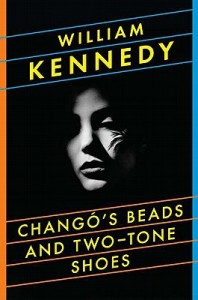 I’m a late arrival to his work. I became fan after acquiring and absorbing a paperback collection of “The Albany Trio,” an anthology that includes Ironweed, Legs, and Billy Phelan’s Greatest Game. I can’t deny that the local connection made it much easier for me to develop a familiarity with his work (Kennedy is a native of the area and uses it as the locale of his novels and I was born and raised in Troy), but it’s his prose and especially his treatment of characters that has retained my enthusiasm and appreciation. Amongst the praises heaped upon him by Sayles and others, what I perhaps appreciate most is his ability to tell us everything about a person with just a brief moment, anecdote, or action. I want more than anything to be able to do that, though I shouldn’t obsess over it because the envy might drive me mad. Rather than Kevin Marshall, a fan at a respectful distance, I’d become Salieri.

Through mutual friendships and company, I’ve had the opportunity to meet Kennedy. Thus far I’ve purposely avoided it. I’m always loathe to impose myself on people for whom I carry such great respect and admiration. I will, however, be at Troy Night Out on Friday, October 28th to have him sign my copy of Chango’s Beads and Two-Tone Shoes when he appears at Market Block Books (290 River Street, Troy NY).

I’ll likely keep it brief. I’ll give him my book, let him scribble, shake his hand, then say “thank you” and let him assume it was for the signing rather than the reinvigoration of my love for the written word and passion for writing at a time in my life – right now – when I so desperately needed it.