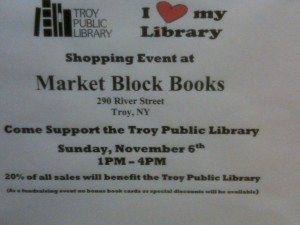 Market Block Books will be holding a special fundraiser tomorrow to raise funds for the Troy Public Libraries.

With our economic prospects dimmer, it is more important than ever that we encourage education, literacy, and a genuine enthusiasm for reading in people of all ages. The only available resources many in the community have is the Troy Public Libraries, which sadly face an inevitable shortfall as available funds shrink against rising costs.

So tomorrow, Sunday November 6th, Market Block Books in downtown Troy (290 River St. right on the intersection of River, Front, and 3rd streets) will open with special hours from 10am to 2pm with 20% of all sales going to our libraries.

Go help out local business and our libraries. Two birds with one stone!

If you need recommendations on what to buy:

Chango’s Beads and Two Tone Shoes by William Kennedy
A reporter is witness to turmoil in the form of Castro’s revolt in Cuba in the 1950s and the devastating race riots that plagued Albany and Troy in 1968, finding love and Ernest Hemingway along the way. The latest from the Pulitzer Prize winner might just be his best.

Every Move You Make by M. William Phelps
The true crime writer tackles the case of Troy native Gary Evans, career thief and serial murderer. Inspector Jim Horton, who established a relationship with Evans as a CI and pursued him on and off for roughly 15 years, didn’t even know the extent of his crimes and their nature until Evans dramatic capture and shocking confessions in 1997. The book follows the story from Evans’ beginnings in Troy, to rumors of his involvement in disappearances, and finally to his capture and spectacular finale. To call this a page-turner is an understatement.