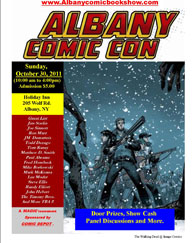 I wanted to do a wonderful and inspiring write-up of the day I spent at the Albany Comic Con last Sunday, but time has been in short supply and life has not.

Instead, I will just say what a wonderful thing you missed if you weren’t there. The Holiday Inn on Wolf Road hosted the festivities as they have for several years now. Unlike last Spring, Sunday’s event was back to using both rooms for the Con, which gave more walking space and room to breathe the air shared by creators from stalwart writer Ron Marz to legendary penciler and inker Dick Ayers.

I spoke with Ron, who has encountered controversy in his return to DC Comics due to the setting of the first issue of “Voodoo,” part of the company’s much ballyhooed relaunch this Fall. Me and Ron have developed a friendly rapport over the last couple years stemming from our mutual involvement in the “Mockingbird Marathon” fundraise for Literacy Volunteers of the Capital Region, so I can’t and won’t deign to be wholly objective in the discussion. In case you don’t know, basically Ron is a mysognist and a monster. Well, not really, but that’s what a lot of comic readers on the internet would have you believe. The first issue of “Voodoo,” which is marketed and identified as a Teen book (meaning for more mature/developed readers), takes place in a strip club. It does not glorify the practice, nor is it objectifying in its context: the lead character is a shape-shifting alien who is a stripper for all of the first half of the book for reconaissance. I bought the first two issues from him and read them myself. I think the book and Ron are victims of the fallout from controversies stemming from other (and lesser) offerings birthed by DC’s relaunch; in particular the over-sexualization of the Catwoman character, who ends her first issue straddling Batman on a rooftop and engaging in intercourse with him. On the other hand, the best description I have for “Voodoo” is as sci-fi noir set in the DCU, and the various settings are appropriate for what it’s trying to accomplish. Whether one thinks that’s appropriate for a DC book is something to take up with editorial, not the creators.

I also saw another guy I worked with on the Marathon, Matthew Dow Smith, the penciller for IDW’s “Doctor Who” comics. I finally picked up a trade from him to read. Thus far I’ve only enjoyed his art from afar, which unlike so many other pencilers is stylistic and expressionist rather than trying to restrict itself to modern comic mores. In that sense I feel he’s reminiscent of Mike Mignola, though I’m sure more than one person would bristle at the suggestion. Matthew, in particular, will probably be a little embarrassed by the comparison, but hey, at least it’s a flattering one.

After talking to Matthew I was greeted with a hello from a stranger at an adjacent table. Ian Struckhoff, in an aggressive but pleasant pitch, introduced himself to me and shook my hand. He’s self-publishing writer and creator with a salesman’s knack for engagement. I had a really pleasant conversation with him about the creative process and his own imprint, Black Label Comics. When I got home I read the first issue of his title “The Dark Age,” about a female homicide detective on the trail of a killer who starts hearing about an angel. The issue reveals, through flashbacks, that magic was a very real and functioning aspect of our civilization until it was exterminated by military intervention during the Middle Ages (possibly, and it may be revealed in later issues, as part of the Crusades). The heavy premise could weigh down the book, but to his credit Ian keeps it light and only tells the reader what s/he needs to know to stay in the story. I was glad that the work lived up to the pitch and I’m intrigued to see more of it.

Later in the day I was shocked to see J.M. DeMatteis, who co-wrote and drew one of my favorite books of all time, Justice League International. I fanboyed a little bit, getting his autograph and gushing over his work. I hadn’t paid much attention to the marketing leading up to the Con since I was already going, so his presence was a genuine and pleasant surprise. 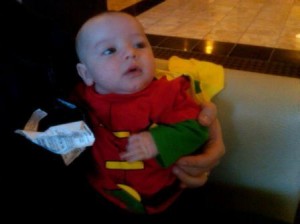 Then, of course, there’s the people walking the floors. Enthusiastic fans chatting up anyone and everyone around them, costumed anime characters, babies dressed as Robin (that’s Eric Newsom‘s adorable and sweet little two-month-old Henry), and a working replica of R2D2. The Con is, as expected, a strange and wonderful assortment of geekdom, but it’s also accessible to the layperson.

The only regret I have is that I was unable to get a moment with Dick Ayers, a truly great and sometimes overlooked artist from the 50s whose work on Western comic “Ghost Rider” (not to be confused with Marvel’s “Ghost Rider”) was incredible. He later worked for Marvel itself and became one of the best inkers the prolific and legendary Jack Kirby ever had. Thankfully, local blog Nippertown got a word with the man in the days leading up to the Con and has a nice little retrospective on his career.

They’ll be back again in the Spring for another Con, and so will I. The official site has more info at Albanycomicbookshow.com.

3 Responses to The Albany Comic Con: a quick recap