Joe Paterno, Penn State, and Priorities Occupy Albany: you had me at hello, then you lost me at “this is what oppression looks like!”

What was that third thing Rick Perry was trying to remember?

In case you missed it, Rick Perry sank himself last night.

Note: what he named are Departments, not agencies, but that’s just semantics.

Well, it was inevitable. The problem with Perry from the start is that he ran on being the new George W. Bush. He had Bush’s “aw shucks” mentality, down-home ethics, and perception of a simpleton, but was lacking any of the charm or charisma that’s required to pull it off.

So what was that third thing Rick Perry wanted to eliminate? I’ve narrowed it down to 10 possibilities. 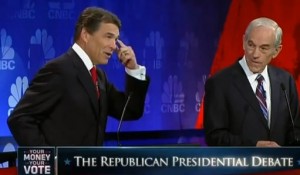 5 Responses to What was that third thing Rick Perry was trying to remember?