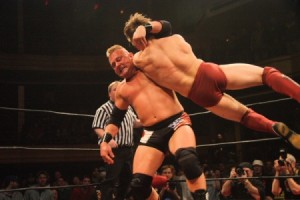 One day I’ll write a memoir about my former obsession with professional wrestling, how I fell out of it, and the tragedies of the business and how they paralleled changes in my own personal life.

For now, I only glance at it from a safe distance. But just a few short years ago, I was still ordering DVDs online from guys like Chris Schoen over at IVP Productions to watch guys like Mark “Bison” Smith do their thing overseas, thousands of miles and oceans away from the turmoil in the States.

In addition to being one of the better “big men” working in the business (and probably better than anyone comparable to his size working stateside), he was from all accounts one of the good guys. Sadly, he passed away yesterday in Puerto Rico due to complications from a heart attack.

Zach Arnold at Fight Opinion, who extensively covered the Japanese wrestling scene before making the same transition I did to full MMA devotion, was a friend of Smith and has a great piece on him. I urge you all to check it out.