Let’s talk about Newt Gingrich, the alleged intellectual who has inconceivably risen towards to top of the field for the GOP nomination in 2012, despite being about twenty years past his expiration date for relevance and integrity.

Gingrich has been positioned as a “thinking man’s candidate” amidst a field consisting of bigots, caricatures, and charlatans that have run themselves off a cliff in pursuit of the highest office in the land. Even Herman Cain and Rick Perry, who had appeared to be taken seriously for a short stretch, have been plagued with concerns raised through media vetting that have been exponentially exacerbated by their inability to say something that doesn’t make any given situation worse for them.

And so now we find ourselves with, realistically, a two-man race: Romney, who faces very real challenges as a compromising official facing a Christian right that is aggressively apprehensive towards anyone of Mormon faith, and Newt Gingrich, the intellectual who is nothing of the sort.

Where do we even begin to address this farce?

For starters there was Gingrich’s comment to The National Review that Obama possessed a Kenyan, anti-colonial world view that served as a predictive model for his behavior. If you’re wondering what he means, you’re not the only one. Supposedly Obama developed that Kenyan anti-colonial sensibility sometime during the age of six to ten in…Indonesia. Or perhaps during the rest of his childhood, which was spent in Hawaii before leaving for Los Angeles after High School to pursue his education. Perhaps he got it from his absentee and estranged father? Or maybe Newt is just an overtly racist buffoon. Only he knows the real answer, and the rest of us can only speculate. 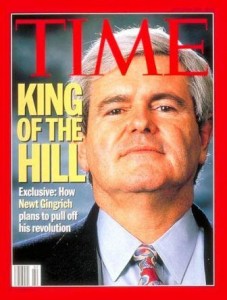 Throughout his career, Gingrich has cultivated an image of a conservative intellectual that, like any other PR concoction, does not hold up to scrutiny.

This tone is in keeping with his rhetoric, which one must not mistake for intellect or discourse. It is, rather, self-serving blustery bile that eschews hate and vitriol to reinforce an ignorant electorate rather than encourage debate and change. He himself has gone on record saying that the quest to win elections is, for all intents and purposes, a civil war war, giving it the same breadth and earnestness as a bloody conflict but with ballots in place of bullets.

No man who possesses this attitude about politics and society while labeling any and all opposition as fascist, Soviet, or both, should be bestowed the honor of being an intellectual. A strategist, maybe. A hack, definitely. But not an intellectual.

Even if we were to discount these statements as the exaggerations of a paid consultant and occasional pundit, there’s still the issue of his role in fanning the flames of ignorance and, at times, bigotry in recent social and political debates.

When Prop 8 in California was proposed to eliminate same-sex marriage, a coalition of anti-gay extremists spread a wealth of disinformation and lobbied successfully to pass a measure in a mostly democratic state that eliminated civil rights and spread shame throughout this country. Ever the opportunist, Gingrich supported the ban with numerous appearances throughout radio and television. He even went so far to say the following on Fox’s O’Reilly Factor:

I think there is a gay and secular fascism in this country that wants to impose its will on the rest of us, is prepared to use violence, to use harassment. I think it is prepared to use the government if it can get control of it. I think that it is a very dangerous threat to anybody who believes in traditional religion.”

Because rather than being advocates for equality, or even at a more base level concerned with the fact that a law was being passed in 2011 that actually revoked civil rights rather than strengthening them, opponents of the measure were instead trying to stifle the rights of others by restricting their right to say others have no rights. Got that? If not, don’t worry, you’re just not an intellectual. 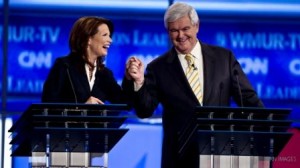 Gingrich has consistently praised and supported Tea Party candidates and now finds himself looking like a shining light in a field of hopeless TP buffoons.

Then there was the infamous dust-up over the Ground Zero Mosque, which was neither a Mosque nor at Ground Zero (two blocks away). For all his faults, I at least understood where Rudolph Giuliani (among others) was coming from. September 11th left a permanent scar on the face of New Yorkers, and anybody who was there that day is going to react first and foremost with emotion when something comes forth that may re-open that wound or at the very least pick at its scabs. I disagreed, and thought that Giuliani and others were getting caught up in the political opportunism of those that were eager to placate a hysterical and racist base. Among those was, once again, our friend the intellectual. His argument was that there should be no Mosque near Ground Zero because of the lack of religious freedoms in other countries.

There shouldn’t be a mosque anywhere in the general vicinity of Ground Zero so long as there are no churches or synagogues in Saudi Arabia. The time for double standards that allow Islamists to behave aggressively toward us while they demand our weakness and submission is over.

The proposed “Cordoba House” overlooking the World Trade Center site – where a group of jihadists killed over 3000 Americans and destroyed one of our most famous landmarks – is a test of the timidity, passivity and historic ignorance of American elites. For example, most of them don’t understand that “Cordoba House” is a deliberately insulting term. It refers to Cordoba, Spain – the capital of Muslim conquerors who symbolized their victory over the Christian Spaniards by transforming a church there into the world’s third-largest mosque complex.

America should not, then, strive to be better than other citizens of the world. We should not lead the charge for freedom and tolerance. Rather, stupid is as stupid does, and if there’s no church in Saudi Arabia then there’s no Mosque in Manhattan. Even though, again, this wasn’t a Mosque and this is actually America. It is also worth noting that the purpose of calling the religious interfaith portion of the project “Cordoba House” (not the name of the building itself as was implied by many) was in reference to the fact that there WERE synagogues and Christian churches in the Muslim capital after the conquest. It was meant to be symbolic of the exact kind of interfaith exchange that Gingrich thinks we should restrict for the sake of sentimentality and the realities of an unrelated foreign government. And if the intellectual thinks that this is somehow offensive simply because it also invokes a Muslim empire from hundreds of years ago, then he should probably get to work on ridding us of all those odes and references throughout our culture to conquests and practices of the Roman and British empires.

Then there’s the hot button issue of health care. When “Obamacare” was in debate, Gingrich strongly supported and repeated the astoundingly ignorant (and boastfully reckless) “death panel” claim made by Sarah Palin. Palin’s imaginary scenario was actually co-opted from a practice at Gundersen Lutheran Hospital in La Crosse, Wisconsin, whose end of life care brought forth not only discussion on how hospitals handle the dying but also saved it millions in costs. As such, it actually drew praise from both those who support forward-thinking ideas about dignity in dying and fiscal Conservatives, one of whom said that if all hospitals were to apply Gundersen’s approach it would save Medicare more than $33 million a year.

By the way, that fiscal conservative? Newt Gingrich.

I am not naive enough to think that a man who is running for an elected office can be realistically expected to be one hundred percent honest, forthright, and everything he claims to be. Far from it. I think it is a self-defeating cynicism, and I strive for better, but I would not kid myself by saying Gingrich is the sole offender of these crimes against intellect and national discourse.

It’s just that the best that could be said is that he’s the worst of the best of them, and there has been absolutely nothing in his career to suggest that he should be seen as an intellectual or even a thinker. He is an opportunist, and he is ambitious. And he has a PhD in Medieval history. But even that, as has been shown, is something that he knowingly misconstrues for votes. Or, perhaps more apt, for dollars at the expense of sense.