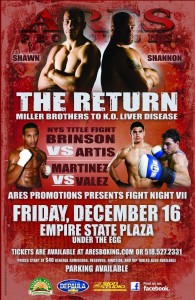 The only other time professional boxers and brothers Shawn and Shannon Miller fought on the same card, it was for the former’s (and younger of the two) professional debut. On December 16th they’ll share the bill for a second time, but with greater significance for both. And not just because it’s Shannon’s return after a self-imposed retirement.

Both will fight on December 16th at The Egg in Albany to raise money for KOLD, or Knock Out Liver Disease, an organization started by Shannon to assist others financially that suffer from liver disease. Both Shawn and Shannon will donate their entire purses to the foundation, as well as a percentage of all ticket and t-shirt sales.

The idea came to Shannon after he donated sixty percent of his liver to his Uncle Ray last year. It was the hope of doctors that the surgery would repair the damage done by his uncle’s liver cancer and restore him to health.

Staying true to his reputation inside the ring, Shannon recovered much sooner than expected. Unfortunately, months after the operation, doctors found that Ray’s cancer had spread. Even still, Shannon’s sacrifice did not go unnoticed by those around him, and it gave his Uncle a fighting chance and time he otherwise would not have had.

“Nothing is promised and ever 100%,” Shawn recently told me. “But we’re hopeful.”

Now the Miller brothers want to give that gift of hope to others fighting the disease.

“We both look forward to make this reach people in their quest to beat liver disease,” Shawn told me. “Help them with money and anything else that comes with [it].”

It’s their hope that KOLD will do just that, and you can be a part of it by buying tickets for the event.

The event goes down on Friday, December 16th. Tickets can be purchased at AresBoxing.com or by calling (518) 527-2331. Prices start at $40 for General Admission with floor, ringside, and VIP tables also available.

The two are also looking for sponsors. If you own an area (or national) business and want to help, please go to this website’s contact page.