The Top 10 Most Annoying Things in the World (Right Now) This Saturday in Troy: date auction, live music, swing, and more at the River Street Riot 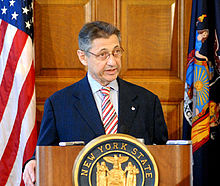 The New York State Senate passed the bill to legalize Mixed Martial Arts in the Empire State by a slightly larger margin than last year (43-14), but still faces uncertainty in the State Assembly. In the previous two years, the bill to legalize MMA (full text of bill) passed in the Senate only to be killed in Committee before it can reach the Assembly floor.

“I have mixed feelings about it,” said Silver at a press conference to announce tenant protection. “On the one hand I do believe it’s rather violent and it sets a tone for people. On the other hand, you can turn on the television and see it, a child can see it from their homes on a regular TV and we’re one of the few states that don’t legalize it. Obviously legalization comes with regulation, and we may be better off having regulation.”

“I do believe it’s rather violent and sets a tone for people,” he said, ignoring the violence, injuries, and death associated with other sports. …

Read more over at the Mixed Marshall Arts blog