Assholes on the Internet Hilariously Miss the Point of “Girls”

I’ve been enjoying “Girls” quite a bit. Dunham’s hilarious and her writing’s great. It provides awkward moments that are actually organic, as opposed to the lazy comedy tropes in recent years of characters just creating awkward situations out of thin air and saying things as if they’re not aware they’re even human beings.

The reactions to it, particularly the negative ones, have been a bit silly. The all-white principal cast has been unfairly singled out, even though the bigger problem is television and society as a whole. Others have complained of it as a show about privilege, which, exactly. That’s a theme of the show. It opens with her parents cutting her off and the fit that she throws about it. Criticizing Lena Dunham’s character for being privileged is like taking “All in the Family” to task because that Archie Bunker is just so bitter and racist and dumb!

The best and most laughably pathetic attempt to deride the show, though, comes from this meme: 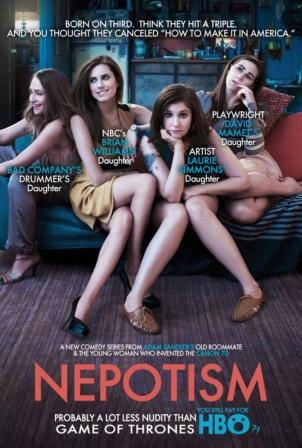 I bet being the daughter of the drummer of the 1970s band Bad Company(!) really opened a lot of doors for that actress! Because he’s such a player, that guy that drummed for that band that had one hit album thirty or forty years ago. Oh, and let’s not forget about the fact that Lena Dunham is the daughter of an artist you and Hollywood and HBO have never heard of. Also, hey, check out Mamet’s daughter. I bet that helped her out quite a bit since he’s such an affable and congenial fella.

Sorry you’re not that talented and nobody likes your boring pitches, assholes on the internet. But don’t take it out on Lena Dunham.