Is DC Comics’ Approach to Unveiling a newly Gay Character the Right One? 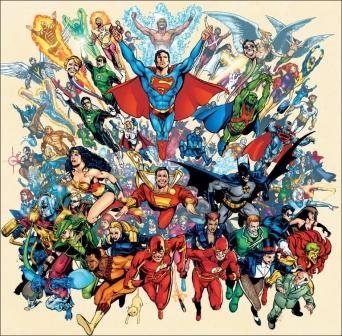 From the Robot 6 blog:

Although readers will have to wait until sometime in June — perhaps not coincidentally, Lesbian, Gay, Bisexual and Transgender Pride Month — to learn which established DC Comics character will be reintroduced as gay, we already know at least two details: It’s a major character (better luck next time, Doll Man), and it’s a guy.

“One of the major iconic DC characters will reveal that he is gay in a storyline in June,” Courtney Simmons, DC Entertainment’s senior vice president of publicity, confirmed to ABC News following the weekend revelation by Co-Publisher Dan DiDio that the formerly heterosexual figure will become “one of our most prominent gay characters.”

Maybe it’s just me, but I’m a bit torn over how DC is handling this. On the one hand, it’s good for kids, particularly gay ones, to see a gay “major character” (as we know from past applications this term is subjective to the point of absurdity). Comics are on the extreme end of the escapist entertainment spectrum, so  it’s good to have a character that kids seeking a respite from day to day life can identify with. It has the potential to be comforting and inspiring.

And yet, the way it’s being hyped and teased comes across as DC whoring off what could be a very therapeutic and comforting thing for kids and turning it into a months-long tease to sell books. It almost borders on self-parody. I can see the posters now, with various characters silhouetted and “Who’s the Gay?!” in big bold letters.

To me it stinks of being exploitative and disingenuous. I think the bigger issue, though, is that it evokes an aura of mystery and suspicion that might not really be healthy and, as such, might be self-defeating. If there is any intent towards using this character to make people comfortable with gay people, challenge bigots, and especially help gay kids, it might be beneficial for Didio et al not to turn this into ballyhoo. Homosexuals struggle enough with acceptance and civil rights, so they might not be keen on being portrayed – even unintentionally – as a sideshow attraction.

The best thing in this sort of situation, IMO, is to not say anything until the character debuts. Put out that issue and have the character be gay. Then put out a press release the day and/or week that issue comes out that, in short, says “yep, deal with it.”

Of course, that’s my take on it, and given that I’m merely an observer it needs to be taken with a grain of salt and is of course open to any and all criticism. Would love to hear the take from those of you that identify as LGBT.

7 Responses to Is DC Comics’ Approach to Unveiling a newly Gay Character the Right One?