I Promise You Laughter, This Week and Next Superfriends/Golden Girls Mash-Up 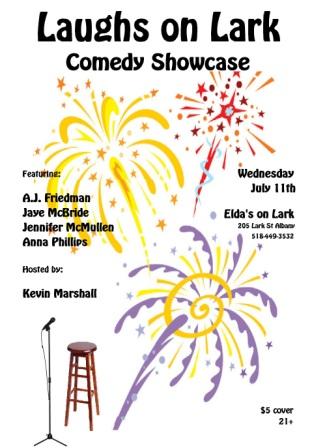 I honestly don’t know why you wouldn’t be at Laughs on Lark this Wednesday night at 9pm. It’s only five bucks, and you’re going to see four legitimately funny comedians.

When I say legitimately funny, I mean this isn’t open mic hackery where you’re promised funny and instead get people farting into a microphone. I’m talking Jaye McBride, who is the nigh-undisputed best comedian working out of the Albany area. Joining her are Jennifer McMullen, a local favorite and regular at the Waterworks Comedy Lounge. Then there’s Anna Phillips and AJ Friedman, joining us from Syracuse, New York.

Hosted by yours truly.

Look, you’re going to need something to get you over that mid-week hump.

That’s what we’re here for. To hump you hard with comedy.

A special thank you to everyone who came out to last Friday’s show at 51 3rd St. in Troy. It was a bit tough since it was SUPER hot and muggy out, but I thought everyone did a great job. I was thrilled to see that we literally filled every seat in the house and then some. A special thanks as well to Kirk for making it all possible. We’ll definitely be back again before the end of the year!

Tagged with: laughs on lark