Simply awful. Hope to see you all this Friday!

Yesterday I finally got the opportunity to see “The Dark Knight Rises,” which including the six or seven theatrical trailers and nonsense they show before the film itself puts the total amount of time spent in the theater somewhere in the neighborhood of what they used to call “a fortnight.” Many blame Christopher Nolan for the lengths of these epics, though I think it’s fair to note that Marion Cotillard has it written into all her contracts that no movie she’s in shall ever have a runtime less than 200 minutes (see also: “La Vie En Rose”).

All in all, I thought the film was great but far from perfect. You’re likely to come across most blogs and almost break your neck from slipping on the frothy liquid combination of fanboy saliva and their tears of frustration over a small handful of critics deigning to give it a slightly less than glowing review, resulting in a Rotten Tomato aggregate score below 90%. As if that’s a real fucking thing that people – adult people – should ever give a shit about.

Not me, friend. I’m going to tell you that I loved this film but also acknowledge that it has some glaring and, perhaps, troubling shortcomings. 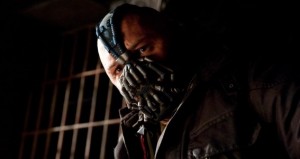 “Did you say when Gotham is plastic, I have your permission to die? So you’re an anarchist but also one of those guys who buys furniture and then covers it up so that you never get to see or use it? Man, you are FUUUUUUUCKED UUUUUUP!”

First and most importantly, I was desperate for this franchise to escape its one over-arching pitfall: its female characters  exist only to either provide male characters with motive or be redeemed by the protagonist. Nolan goes out of his way to give his films perspective through numerous eyes, but all of them are males. This point will, I imagine, be dismissed by many reading this because of their tendency towards hemming and hawing at anything that even hints at a discussion about gender. But it’s not nit-picking to call Nolan out on what is a very troubling tendency towards a narrow and borderline misogynistic narrative. “Inception” was probably the worst example of this, with the major female character being an imaginary antagonist (for fuck’s sake!).

Which brings us to the goddamn mess of a character that is Catwoman (played by Anne Hathaway who did her damndest and remains one Hell of an underrated actress as well as one of the most beautiful women that ever lived), whose conflicting motives and emotions make her not complicated so much as confounding. The script and Hathaway’s performance go to great lengths to show how much thrill and excitement she gets out of burglary; it gives her a sense of purpose and obviously provides an adrenaline rush. We’re shown that she steals some items simply to possess them. But then she’s also shown as someone looking for a “clean slate,” which in the film comes in the form of some magic software that completely removes a person’s criminal history from their background. So she loves it, but somehow is also only doing it because she absolutely has to. One might be able to reconcile this, most likely through the clumsy excuse of pathological behavior or addiction, neither of which is even hinted at. It’s a lot harder to reconcile the idea that she welcomes the socio-political edge of Bane and the League of Assassins but is also shown committing acts on their behest under duress and threat of extermination. While these are not mutually exclusive scenarios, they way they are played tries to give Selina Kyle depth but instead results, ultimately, in confusion. The film spends too much time trying to explain who she is and why she’s Catwoman, yet somehow in the end leaves us somehow knowing her even less than when we first see her.

Bane, on the other hand, was handled fantastically despite his character’s history. The announcement of the character as the main antagonist in the film was, for me, a disappointment. Bane, in the comics, a laughably bad construct; acting as either a brilliant parody of 1990s comic book villains or an accidental metaphor for the artistic shortcomings of the 90s comics industry (an uber-muscular guy in a mask with tubes coming out of his head breaks the back of the iconic Batman). He is and has every sort of character trait you can imagine, being brilliant and tortured and sympathetic and cruel and on steroids and conflicted and a villain and an anti-hero all at once. Normally such complications are due to continuity conflicts created by a succession of writers, but all these attributes were thrown at Bane at his inception. I’m still not clear why he was chosen other than every other member of Batman’s rogues gallery was disqualified due to Nolan’s desire to stay away from supernatural, fantasy, or hard sci-fi elements; though a central plot device is so over the top and silly that it completely obliterates that motif and leaves you wondering why Nolan was so insistent on keeping this whole thing “grounded.”

But Nolan, to his credit, makes Bane in this film a character unto himself. There are elements of his origin and, actually, in the overall plot itself that invoke storylines from the comics themselves, and not just the obvious reference/re-enactment to his most famous turn in the “Knightfall” story arc. Unlike Catwoman, Bane’s complexities in “The Dark Knight Rises” sort of make sense, except for his lack of self-preservation that I can’t get into without spoiling it. Let’s just say that unfortunately, at the end of the film, given the twists that come in the third act we are left wondering why he’d be so willing to do what he was threatening to do all along.

Which is the one major storytelling problem with this film: the twists are arbitrary and a bit silly. Again, I can’t go any further without spoilers, but suffice to say that the treatment of a certain character’s arc is interesting but perhaps unnecessary. At first it’s intriguing, but in the end we’re left asking why, again, Bane would go through with this plan given what we know about him and another character.

So that’s all the bad (oh and the fight choreography stinks too; in the midst of some Judo grappling Bane throws a spinning downward cross that looks like something out of a bad John Woo film).

Thankfully, there’s plenty of good, and it’s mostly in the execution. Nolan knows how to pace a film so that you’re hoping for another half-hour rather than staring at the watch and waiting for them to get from Point A to Point B. Much of this is owed to the strength of the supporting cast, not just in performances (from the likes of Gary Oldman and Joseph Gordon-Levitt) but also in how secondary and tertiary characters are handled. Each are given subplots and we care about them, even when they’re given only a fraction of screentime (or maybe it just seems that way in a movie with a runtime exceeding 160 minutes).

It’s also a gorgeous film, owing to the genius of Wally Pfister. So often we praise directors while forgetting that often it’s their Director of Photography who deserves much of the credit. In addition to this trilogy, Pfister also worked on “Inception,” “The Prestige,” “Moneyball,” and “Insomnia,” all of which ran among the most beautifully shot films of the last decade.

And it’s fun. And it’s Batman.

In short: I liked the film, warts and all.

Tagged with: the dark knight rises