Well then what should I call you people? Precocious but charming: Josh Ritter at The Egg’s Swyer Theater

Here’s what I wrote at the time (which actually got mentioned in a blog post by one of the editors over at The Atlantic):

On the plus side, this is so bad that we can, for the most part, avoid that lengthy and tired discussion about whether or not this band is “back” or still “has it.”

Well, Metallica has released the full track of that aforementioned song (“The View”) along with a thirty-second preview of every other song on the album.

Before I give you my reaction, I want to show you the cover of “Lulu.” Take a good look, examine it closely, and in particular gaze into the eyes of the (I assume) titular figure: 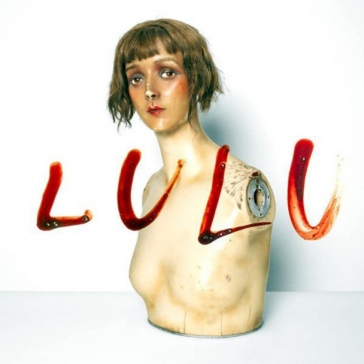 What do those eyes say to you? To me, they convey a creature that is suffering; one that didn’t ask for this existence but was thrust into it anyway. Worse, she has been reduced to a near useless torso and her hair has not been attended to. She is a patchwork of suffering constructed by men who did not for one second think of the consequences of their actions, not just on her but on the people around her.

It’s perfect. I see it as both symbolic of this enterprise and of the listener. I empathize with Lulu, because I have listened to these tracks. They are monstrosities willed into existence by men who lean on their egos and do the unconscionable just for the sake of saying they did it.

In that sense, we are all Lulu.

You might think I am being cruel, unfair, and overly harsh considering that these are only thirty second snippets. But trust me, it’s enough, and you’ll understand when you hear them for yourself. These are the sounds the ATF played to try to get David Koresh and his followers to leave their Branch Davidian Compound in Waco, Texas. Thirty seconds is all you need to hear to know that only further suffering and psychological distress awaits.

Check out the preview for yourself, followed by my dramatization of the recording of the album:

Lou Reed: I AM THE GOLDEN GHOST, YOU ARE THE HAUNTED VISAGE OF MY LOVE. I AM—-

Lars Ulrich: So, ahm, I thought we’d, ah, ya know, get to playin’ some tracks behind ya. Whatcha think?

Lou Reed: SEETHING THROUGH CLENCHED TEETH, I CELEBRATE TET TO THE DEATH.

Lou Reed: —IN THE RAIN OF COSMOS, YOU ARE THE STAR POND—

NOTE: I made up all those lyrics, except the line “you’re not really there…HALLUCINAAAATION!” That one’s real, it’s on the track “Dragon”, and when I heard it I literally spit out my water.