Sweetness: The Enigmatic Life of Walter Payton (a review) To NaNoWriMo or not to NaNoWriMo?

The Shakespeare controversy, which emerged in the 19th century (at that time, theorists proposed that Francis Bacon was Shakespeare), was one of the origins of the willful ignorance and insidious false balance that is now rotting away our capacity to have meaningful discussions. The wider public, which has no reason to be familiar with questions of either Renaissance chronology or climate science, assumes that if there are arguments, there must be reasons for those arguments. Along with a right-wing antielitism, an unthinking left-wing open-mindedness and relativism have also given lunatic ideas soil to grow in. Our politeness has actually led us to believe that everybody deserves a say.

The problem is that not everybody does deserve a say. Just because an opinion exists does not mean that the opinion is worthy of respect. Some people deserve to be marginalized and excluded. There are many questions in this world over which rational people can have sensible confrontations: whether lower taxes stimulate or stagnate growth; whether abortion is immoral; whether the ’60s were an achievement or a disaster; whether the universe is motivated by a force for benevolence; whether the Fonz jumping on water skis over a shark was cool or lame. Whether Shakespeare wrote Shakespeare is not one of these questions.

Yes, yes, a thousand times yes. Climate change skeptics do deserve to get told that their theories are unsound. Truthers propounding the idea that 9/11 was an inside job deserve to be told “yes, and bin Laden just took credit for it because he was bored, you twit.” 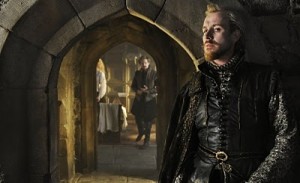 During shooting of "Anonymous," Rhys Ifans often had to avoid a fellow actor who was convinced Obama was born in Kenya and wouldn't shut up about it.

It’ll be easy enough to judge the film on its own merits once I see it, and all indications are that I will enjoy it immensely. However, that’s going to require me to treat it as a work of fiction rather than a conversation starter, which is exactly what Emmerich and the film’s producers have been purporting in the film’s marketing and even in interviews with legitimate press. They act convinced, even though I suspect they know full well that the theory is bunk and not worth nearly as much as the artistic and creative energies put into making the film itself.

But with all that, I think Patton Oswalt put it best in an unrelated rant off his latest album:

“Hey, you have to respect everybody’s beliefs.” No you don’t! That’s what gets us in trouble. You have to—look, you have to acknowledge everyone’s beliefs. And then you have to reserve the right to go ‘that is fucking stupid. Are you kidding me?’ I acknowledge you believe that, that’s great, but I’m not gonna respect it. We have an Uncle who believes he saw Sasquatch. We do not believe him, nor do we respect him. “

Oswalt’s latest album, Finest Hour, is available now. Get it via mp3

.
Read the rest of the article from Stephen Marche, himself an expert on Shakespeare. And please, for God’s sake, never mistake Hollywood for history or bally-hoo for belief.