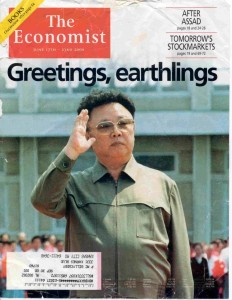 The death of Kim Jong-Il brought no shortage of jokes online, but the potential threat that a destabilized nuclear power poses is dire.

Myself, along with many others on Twitter, exploded in a barrage of jokes and puns upon learning of the death of North Korea’s despot and l’enfant terrible, Kim Jong-Il.

The country’s state media reported his death late Sunday night, citing “physical exhaustion during a train ride.” With the Kim Family Regime’s history of outrageous claims and deification, the awkward wording was met with scoff, ridicule, and no shortage of skepticism in the West. The phrasing, however, is awkward only because of the rushed translation, which even given more time and examination would still read a bit clumsy. But the stranger aspect of it is that they would openly and publicly admit that Dear Leader, whose declining health they steadfastly denied in recent years, came to such an anti-climatic end.

Despite all the ridicule and references to his puppet portrayal in the film “Team America: World Police,” there is at this time a barrage of late night phone calls, conferences, and meetings occurring in Washington, D.C. and throughout the world. That’s because an unstable country with a military force of at least 1.2 million soldiers that also possesses nuclear warheads has suddenly lost the charismatic figure whose worship was the central unifying force behind the regime. Kim Jong-Un (the youngest of his three sons) has been named as predecessor by the state media services, but there is some doubt that all will fall in line without some shaking up of the status quo. The KFR is not a royal family ruling by mandate of heaven. It was a regime built on the personality and perception of a single man that never really existed, and who is now dead.

Five years ago, The Atlantic reported on increasing tensions in the region and the problems that a destabilized North Korea posed:

And that may be reason to worry: totalitarian regimes close to demise are apt to get panicky and do rash things. The weaker North Korea gets, the more dangerous it becomes. The question that should be of greatest concern to the U.S. military in the Pacific—and the question that will likely determine the global balance of power in Asia for generations—is, What happens when North Korea collapses?

Much has changed in the world since this article was written in 2006, but not the danger posed by a regime change in North Korea. It’s worth our time to pour over documents like this and in the coming days, weeks, and month, keep an eye on the East.