If you always agree with someone, then you’re wrong: the post-mortem criticisms of Christopher Hitchens 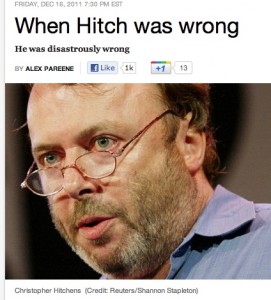 When the sub-headlines of Alex Pareene's essays were bad, they were disastrously bad.

Let me first make one thing clear: I disagreed, from the beginning, with Christopher Hitchens’ view on the War in Iraq. Firstly, there are the political concerns. For as much as we were culpable in our foreign policy blunders throughout the previous decades (cue that infamous photo of Rumsfeld gifting Hussein a rifle), we could not and would not be seen as righting a wrong by entering the country without the support of the UN Security Council and engaging in a grand upheaval and reconstruction in our own image. Even if it had been done correctly (the prevailing ignorance in the White House at the difference between Shiite and Sunni and what that meant for nation-building in Iraq doomed us from the start), our actions would be seen not as altruistic but as unrestrained hubris.

Then there is the moral justification. Hussein was undoubtedly a madman and a tyrant, but for every Hussein there are three or four Idi Amins. This is not to give a pass to the man and his two terrible sons. The regime, from its very inception, was built on violence, terror, and oppression. However, there are and continue to be far worse evils perpetuated throughout the world, yet all we offer to those despots – if we’re feeling particularly noble – is a carefully worded chastisement of very specific transgressions. Why do we and why should we take a high moral stand against a Gulf dictator and say nothing as entire peoples in places like Rwanda and the Sudan are wiped off the map? The answer, sadly, is that we place more value on inanimate black fuel deep under the Earth’s crust than we do the living, thinking, feeling black people above it. So to say we had a moral obligation and use high rhetoric to paint a lesser evil as the devil incarnate is, was, and always will be bunk.

You may wonder why on Earth I’m writing about a very specific area of contention with Hitchens so long after the fact. It’s because articles like this recent piece on Salon.com have popped up in the days following his death.

I think he would’ve been disgusted to see too much worshipful treacle being written about him upon his untimely death, so let’s remember that in addition to being a zingy writer and masterful debater, he was also a bellicose warmongering misogynist.

In case you didn’t know, we never would have gone into Iraq if Hitchens hadn’t supported the idea. Of course, that seems ludicrous, and overstating things a bit. And yet here is the piece’s author, Alex Pareene, to beat the point to death:

There was always something cartoonish about old “Hitch” the rakish intellectual character, puffing away on cigarettes and slurring bon mots in interviews, penning furious denunciations of hypocritical public figures while hosting salons and drunken parties at his Washington, D.C., apartment that some of the most powerful and prominent people in the world of politics and media attended. But his most monumental public crusade had devastating consequences that he never fully grappled with.

Other than the suggestion that Hitchens’ support helped drive us into Iraq (what total fucking nonsense!), Pareene tries to paint him as an opportunist who became famous only after the fact. This man actually believes that Christopher Hitchens, world renowned writer and essayist, was famous because of his controversial stance on the Iraq War, rather than the idea that his stance on the Iraq War became infamous because of who he was.

Alex Pareene must be a smart man; he writes well enough to score a gig with Salon. But what foolishness this is to take people to task for heaping unending praise on a man after his death when nothing of the sort has happened. One need only read the collection of links I posted the day of his death, all of which were far kinder than other sources. Even these tributes were quick to note that the man was fallible, ornery, mercurial, and sometimes *GASP* wrong!

It should be noted that for all of Pareene’s convenient cherry-picking and exaggerations regarding Hitchens’ essays on Iraq, he also conveniently leaves out that Hitchens was also highly critical of the Bush Administration’s other acts, including but not limited to Abu Gharaib, water boarding and other methods of torture, and warrantless domestic wire-tapping. He even – brace yourselves – was one of the plaintiffs in the ACLU case against the NSA for its policies.

It is a sad reflection of internet hackery when writers like Pereene and others take Christopher Hitchens to task for not lining up perfectly with them on every single issue. Hitchens was wrong on Iraq, like he was on many other things. But even at his worst, he was still an undeniably fantastic writer. More importantly, even at his most fallible he raised the level of discourse. He is doing so right now, even in his death. The problem with what Peerene and others have written in the last several days isn’t that it’s being done post-mortem, it’s that the arguments put forth are intellectually dishonest, bordering on laughably absurd.

I will entertain the notion, however, that the piece is actually a cleverly disguised attempt to match the acerbic tone that Hitchens was known for. Maybe Pareene was giving a knowing wink to the the man’s legacy, in which case I salute him.

But I doubt it. The man’s good, but he’s no Hitchens.

One Response to If you always agree with someone, then you’re wrong: the post-mortem criticisms of Christopher Hitchens