Listen to Kevin Marshall (me!) this week on The Underpaid! Another awkward and embarrassing public marriage proposal rejection:

Is it appropriate for elected officials to use government sites to promote themselves and, potentially, their long-term re-election prospects?

The introduction and prevalence of social media in politics (it was key in getting Obama elected in ’08) seems to have outpaced election laws and decorum. A politician certainly has the right to use it as a means of fundraising and/or campaigning, but in recent years the line between a politician’s social media presence and that of official government agencies has become blurred. 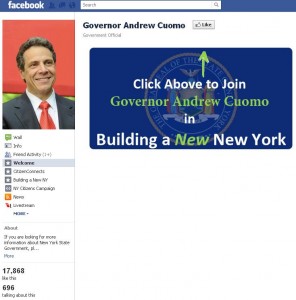 The latest controversy involves the New York State Tax Department’s website, which had a link suggesting you “like” Gov. Andrew Cuomo on Facebook.  Some cried foul and in response the wording of the website was changed to “like” to “connect.” It got them out of a semantic argument, but doesn’t address the murkiness of promoting a politician’s personal social media presence on the official website of a state government agency.

From The Daily News:

While a Cuomo spokesman said the social-media pitches were not tied to any political campaign, some questioned the use of state agency websites to boost the governor’s online popularity.

“The agencies should not be tied to a particular individual but rather to the service of the people of New York,” argued Richard Dadey, executive director of the Citizens Union. “It’s not appropriate to tie a government webpage to an individual elected official’s Facebook page.”

After The News asked questions, the wording was changed to urge people to “connect to Governor Cuomo on Facebook” rather than to ask that visitors “like” Cuomo’s page on the popular site.

The line hasn’t just been blurred with social media, but also with the official website for the Governor. Just last week, the site loudly and gaudily touted changes to the existing tax laws effective January 1st. Cuomo lobbied hard for those changes, and the website’s header was unequivocally an announcement of his victory on the issue and a means of self-promotion.

One could make the argument that it’s nigh impossible to legally define the line between distribution of information and campaigning. It would have been preferable on an ethical level for Cuomo to simply post a modest link to a press release explaining the changes in a neutral fashion. But how do you go about making that distinction objectively?

As The Daily News reported, Cuomo’s people insist that the Facebook site is simply a portal to distribute information to New Yorkers. Yet one look at Cuomo’s official Facebook page tells a slightly different story. The first thing you see is a clear promotion of Cuomo rather than the Governor’s office. The wall feed over the past several weeks has been beating he drum for the changes to the State’s tax code (repeatedly touting it as the “lowest tax rate for middle class New Yorkers in 58 years”) as well as links promoting his media appearances on radio shows hosted by Fred Dicker and former Governor David Paterson. Outside the context of the recent controversy, some of those seem harmless and neutral. Yet there’s a clear underlining subtext promoting Cuomo, the man, and not the Executive Branch of State Government.

But again, where the Hell is that line?

I’m loathe to engage the slippery slope, but I’m not really overly concerned about Andrew Cuomo’s Facebook and this particular controversy. I am concerned, however, that it shows a further erosion of that line we talked about.