Previous Post I’ve been voted one of the best local comedians by readers of Metroland!

Why you should stop spreading “Stop Kony”

Ugandan journalist Angelo Opi-Aiya Izama is one of many dismayed by the deliberate misinformation being spread by Invisible Children in their 30 minute propaganda piece “Stop Kony” and what it says about the current situation in Uganda:

“To call the campaign a misrepresentation is an understatement. While it draws attention to the fact that Kony, indicted for war crimes by the International Criminal Court in 2005, is still on the loose, its portrayal of his alleged crimes in Northern Uganda are from a bygone era. At the height of the war between especially 1999 and 2004, large hordes of children took refuge on the streets of Gulu town to escape the horrors of abduction and brutal conscription to the ranks of the LRA. Today most of these children are semi-adults. Many are still on the streets unemployed. Gulu has the highest numbers of child prostitutes in Uganda. It also has one of the highest rates of HIV/AIDS and Hepatitis.

If six years ago children in Uganda would have feared the hell of being part of the LRA, a well documented reality already, today the real invisible children are those suffering from “Nodding Disease”. Over 4000 children are victims of this incurable debilitating condition. It’s a neurological disease that has baffled world scientists and attacks mainly children from the most war affected districts of Kitgum, Pader and Gulu.”

And this, folks, is how manipulation of the lazy can be so harmful, and why activism must always – ALWAYS – be accompanied by real critique, education, and rumination on the issues they purport to address. 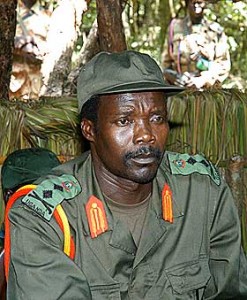 Invisible Children has launched its latest fundraising drive on "stopping" a man who not only isn't operating in Uganda any longer, but may not even be alive.

Joseph Kony is a special kind of monster for whom we should harbor no feelings for other than revilement. In a perfect world we’d get the Sudan or whomever may be harboring him to hand him over to face his 2005 indictment, just as it’d be great if Saudi Arabia hadn’t sheltered Idi Amin from the justice he deserved to face for his tyranny until his death in 2003.

But the fact is that the video that was spread yesterday, and still being spread, is a lie. The LRA as it’s portrayed in that film has been pushed out of Uganda and scattered throughout the eastern portion of the African continent. The film by Invisible Children, then, is nothing more than a fundraising ploy that seeks to build itself on the backs of long dead children. The “Stop Kony” bracelets (on sale for ten dollars; thirty dollars for a pack of materials) are particularly troubling, since it profits off a deliberate lie: that Kony is “still at it.” In truth, not only is he and the LRA he led no longer the force it once was in Uganda, but Kony himself may not even be alive.

All this is typical of Western ego and misplaced good intentions, and while raising awareness of what did happen, it willfully and dishonestly presents it as a case of what is happening. Bring this to the attention of many and you’ll get shouted down, for nothing gets someone more defensive than to be told that what they are getting so fired up about amounts to nothing more than flashy, ignorant nonsense.

Apologists will say, undoubtedly, than any activism is good activism. Thing is, though, good intentions alone can’t make up for knowledge of life’s travails. There are real problems, real issues, and real actions that can and should be taken throughout the world. But if you’re going to be an activist, even an armchair one, you owe it to the people you insist on helping to appear at least somewhat educated and aware. As Izama and others have pointed out, to do otherwise isn’t just lazy and arrogant. It’s actually harmful.

4 Responses to Why you should stop spreading “Stop Kony”