Late last week, monologist Mike Daisey was disgraced by revelations that his famous (now infamous?) segment on “This American Life” last Fall, where he recounted his visit to the Foxconn plant where our beloved Apple products are made, was a lie. 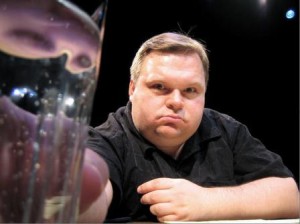 His segment, excerpted from his one-man show The Agony and Ecstasy of Steve Jobs, told stories of child labor, suicides at the workplace, dangerous conditions including but not limited to poisoning via the neurotoxin N-Hexane, long hours, and various other transgressions that showed Apple not to be the good guy it portends to be and China to, once again, be anything but the caretaker of the working man.

“This American Life” producers did as much fact-checking as they could, but Daisey claimed at the time not to have current contact information fir the woman who served as his translator. Unfortunately, someone was able to track her down, and it turns out Daisey lied about much of what he saw.

For years, reporters in China have uncovered a sizable list of problems that have shown the dark side of what it’s like to work at factories that assemble Apple products. Mike Daisey would have you believe that he encountered—first-hand—some of the most egregious examples of this history all in just a six-day trip he took to the city of Shenzhen.

Cathy Lee, Daisey’s translator in Shenzhen, was with Daisey at this meeting in Shenzhen. I met her in the exact place she took Daisey—the gates of Foxconn. So I asked her: “Did you meet people who fit this description?”

- An Acclaimed Apple Critic Made Up the Details (Rob Schmitz for Marketplace.org)

All at once, the house of cards came tumbling down. It seemed on the surface to be another instance not unlike Greg Mortensen’s Three Cups of Tea and all the tales he fabricated in that memoir that led to money being sent to build useless, abandoned structures that claimed to be educating children (as if the situation of uneducated and suffering nomadic tribes could be remedied by slapping a sign that says “school” on a stationary structure). In Mortensen’s case, he completely made up stories and situations to fit his own narrative; one that may not fit the current situation and diverted resources into areas that did little good and in some cases lined his own pockets. Ditto with “Stop Kony 2012,” which has become the penultimate and ugliest example of a racist, condescending campaign heralding the great “white man’s burden” that intentionally distorts history to paint a different picture of Uganda than what’s actually on their canvas.

But buried in the lead of the article that exposes Daisey’s fabrications is what makes this situation slightly different:

What makes this a little complicated is that the things Daisey lied about seeing are things that have actually happened in China: Workers making Apple products have been poisoned by Hexane. Apple’s own audits show (PDF) the company has caught underage workers at a handful of its suppliers. These things are rare, but together, they form an easy-to-understand narrative about Apple.

The poisonings, the suicides, the manglings, the long hours, the child labor: none of this happened while Daisey was there, or went down in the way he described. But even by Foxconn and Apple’s own admission, they are (they’ll claim were) actual problems at their plants.

Let’s break that down: this is just what a giant corporation and its vendor, situated in the strongest and most consistently oppressive nation-state in modern history, is willing to admit to the public. Can you imagine what would be uncovered if a real investigation were to occur?

I can’t and won’t try to excuse Mike Daisey in this instance. He didn’t do himself any favors by fabricating all those events he witnessed, and I find the invocation of artistic license a specious defense. Perhaps a more apt term would be “fucking horseshit.” It’s one thing if you’re writing and/or performing a family memoir or something along those lines, but when it comes to activism, this always – ALWAYS – does more harm than good. Just take a look at Mortensen, Invisible Children, and now Daisey. The story briefly becomes the conditions, but then when the lies are exposed – which they invariably are, particularly in this day and age – the story becomes “they profited from lies.” And in our condemnation of the con artists we forget and forgive the great and powerful Apple their transgressions and consume their products without a tinge of regret, because that guy that went on “This American Life” made it all up.

Except he didn’t. It all happened, just not to him and not in that narrative. Though we are eager to believe otherwise because of the sleek products that we carry with us and help define and establish our social identity, the tales of horrible conditions at Foxconn are very real, and what Daisey made up is likely just the tip of the iceberg.

Lies have been exposed. But let’s not allow the con to make rubes of us all over again.