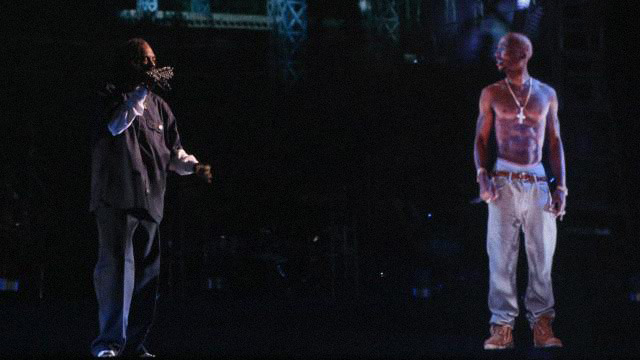 A hologram of Tupac Shakur was used during a performance at Coachella, just to remind us how stale and uncharismatic the current crop of hip-hop artists are.

I honestly don’t know how I feel about this.

In case you don’t know, last weekend at Coachella, they dragged the corpse of Tupac onto the stage and fucked it in front of everybody. Some have said that the corpse fucking was an amazing effect and left the crowd filled with awe and wonder. Others have pointed out that the corpse wasn’t actually fucked; it was an optical illusion that used many of the same principles of a trick that dates back to the 16th century. But that’s splitting hairs. It was an impressive visual.

Now there’s talk that they may fuck Tupac’s corpse on tour. Well, half the acts out there lip-sync that shit anyway, so why not? You know what they say about a fool and his money and how he wants to spend it on watching a not-live “performance” of a fucking hologram. Or something like that.

Admittedly, it was a great visual, but it just seems…I don’t know. How do I put this? Artless and stupid. I think that about sums it up.

Also, who the Hell still listens to Snoop Dogg?

Video is after the jump.